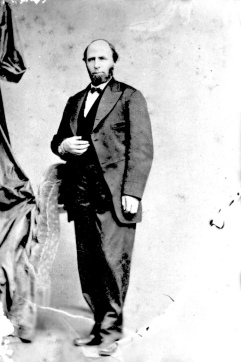 On January 30, 1871, Gov. William Woods Holden’s impeachment trial began. The only Chief Executive in North Carolina history to be impeached and removed from office (and the first in the nation), Holden was a central figure in the state’s Civil War and Reconstruction era.

Holden was the editor of the North Carolina Standard, a Democratic newspaper based in Raleigh, and used the paper to help lead Zebulon B. Vance to victory in the gubernatorial race of 1862. In 1864, Holden ran against Vance and suffered a humiliating defeat.

On May 20, 1865, President Andrew Johnson appointed Holden provisional governor, though he lost the election to the seat that fall.  He made a final bid for governor in 1868 and successfully attained his goal. Vowing to destroy the Ku Klux Klan, the driving force behind increased racial violence, he made several decisions that led to the imposition of martial law in Alamance and Caswell Counties, effectively ending his political career. Notified that he had been impeached by the House of Representatives, Holden turned the duties of his office over to Lieutenant Governor Tod R. Caldwell on December 20. The trial lasted nearly three months. On March 22, 1871, the North Carolina Senate ordered Holden removed from office.