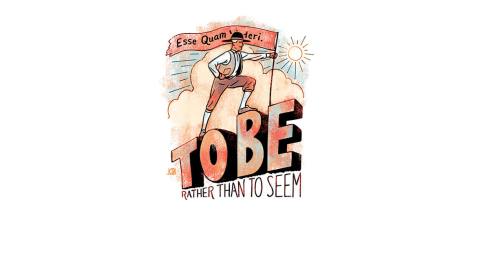 On February 21, 1893, the General Assembly adopted Esse Quam Videri as the official state motto. Translated from Latin, the phrase means “To be rather than to seem.”

The phrase is a quote from the De Amicitia, an essay on friendship by the Roman author and politician Cicero that dates to 44 B.C. Similar sentiments can found in early texts by the Greek poet Eschylus and the philosopher Socrates

Noted Halifax County judge and historian Walter Clark first selected the phrase and drafted the bill for the General Assembly to consider.

Nash County Senator Jacob Battle first introduced it. At the time of its adoption, North Carolina was one of a few states across the country, and the only of 13 original states, without an official motto.

Though North Carolina had never had an official motto during statehood, Quae Sera Tamen Respexit appeared on the colonial seal. That phrase, which means “Which, though late, looked upon me” in Latin, referred to the figure of Liberty which then, as today, also appeared on the seal.

Explore other North Carolina state symbols with articles, an interactive timeline and other features on NCpedia.