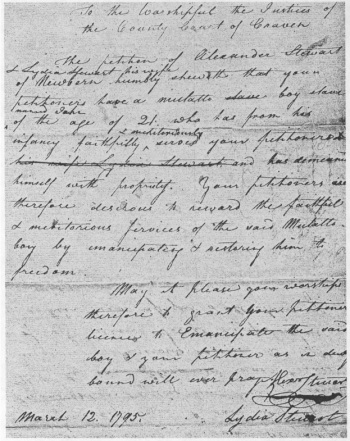 On March 12, 1795, John Carruthers Stanly was freed from slavery in New Bern through a petition of his owners, Alexander and Lydia Stewart.

Generally acknowledged to be the son of prominent New Bern merchant John Wright Stanly and an enslaved African woman, Stanly was born in 1774. He received a good education, trained as a barber and was generally treated with kindness by his owners.

Able to work as a barber while still enslaved, Stanly  was earning a considerable income and was well-known in the community by the time he was freed at the age of 21. He soon began to buy up property, both in New Bern and the surrounding rural areas, and purchased the freedom of his wife and children.

Stanly continued to proposer and became one the richest men in Craven County in the period, dealing in property, renting some of his land, planting cotton and manufacturing turpentine.

As his wealth grew, Stanly began to purchase slaves of his own to meet the increased demands for labor created by his businesses. At one point, he owned more than 160 slaves, making him one of the largest slaveholders in area, and the largest black slaveholder in the South.

Visit: The Stanly House, home to the man who is widely regarded as Carruthers Stanly’s father, is now part of Tryon Palace.