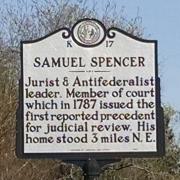 Spencer was a member of North Carolina’s colonial assembly, the state’s de facto executive during the Revolutionary War, a trustee of the University of North Carolina, a colonel in the militia and a superior court judge. He voted against the new federal constitution because it did not yet have a Bill of Rights.

The judge also played a major role in the landmark legal case of Bayard v. Singleton, the first instance in which a court declared an act of the post-revolutionary North Carolina General Assembly unconstitutional.

Spencer had a most unusual death, by turkey. At age 60, Spencer was napping outside on his porch, wearing a red cap. Spencer’s bobbing head was then taken for a challenge by a turkey, which attacked the judge with such violence he was thrown from his chair.

The judge died a few days later from either from injuries sustained in the fall, or from an infection from the scratches.