A Moravian Tradition, the Sunrise Service 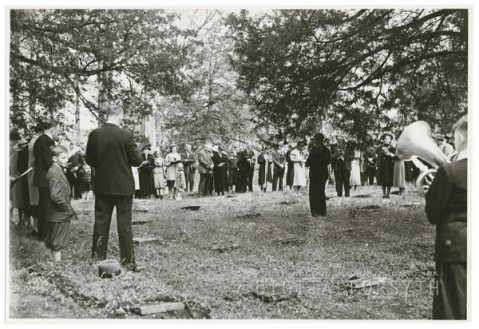 On March 26, 1758, the first Sunrise Easter Service at Bethabara was held on Manakes Hill, north of what is now Winston-Salem. Though the sunrise service can now be found across many different Christian denominations, it got its start in Germany as a distinctly Moravian tradition.

The congregation was awakened early with music, and as they sang the sun broke through of black of clouds, throwing its clear beams upon the scene.

The typical Moravian sunrise service begins with a brass choir waking the congregation prior to the first part of the liturgical service, which was held in the church. The entire congregation then moves to a nearby Moravian cemetery where the second part of the liturgy is read while the sun rises over the graves as a symbol of Christ’s resurrection. 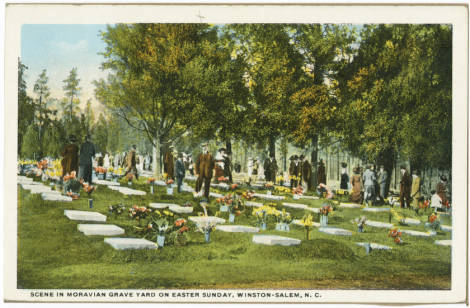 The Moravians had come to the area that is now Forsyth County in 1753 from Pennsylvania in search of a large tract of available land suitable for farming. They had settled in Pennsylvania after a failed settlement attempt in Georgia and after being largely forced to leave their ancestral homelands in central Europe.

Though they had planned a community centered around farms, their first settlement at Bethabara grew to a town that included a church, gristmill, saw mill, tannery, pottery, distillery and other crafts shops by the end of 1756.

From Bethabara the group quickly fanned out across today’s Forsyth County, establishing the settlements of Bethania, Salem, Friedberg and Friedland.