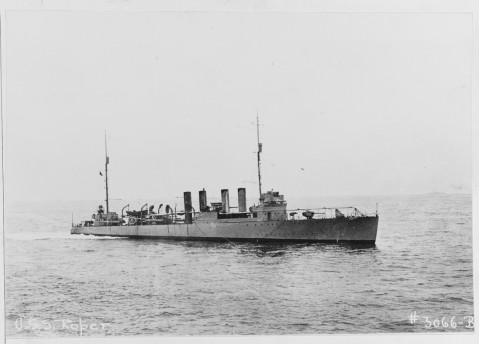 On April 14, 1942, the destroyer USS Roper sank the German submarine U-85 off the Outer Banks between Wimble Shoals and Cape Hatteras.

By January 1942 as many as 19 German U-boats patrolled the Atlantic coastline on any given day, with two or three hiding at Diamond Shoals at any given time to attack ships as they rounded Cape Hatteras. At the height of what is now called the Battle of Torpedo Junction, the Germans were sinking a ship nearly every day; between freighters, tankers and passenger ships the losses were tremendous.

At the same time, the American military was learning how to detect and defeat the U-boats. The first hit was on U-85. Navy divers surveyed the area near the wreck and attempted to salvage the ship, but efforts were not successful. Since men were needed elsewhere, the submarine was left to the elements.

The wreck was explored by recreational divers for many years. In July 2001, divers salvaged the submarine’s Enigma machine. The Germans used the complex coding device for secret communications, especially for divulging locations of enemy vessels and supply convoys.

Although it is still being conserved, the stable parts of the machine are on display at the Graveyard of the Atlantic Museum in Hatteras.