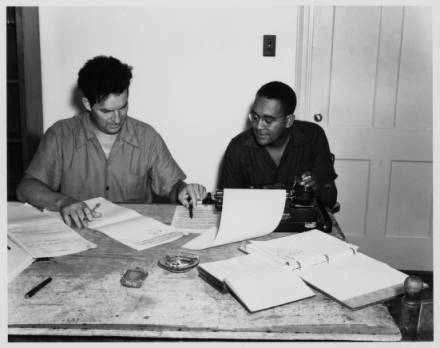 Among North Carolina’s most revered writers, Green, born in Harnett County, began study at the University of North Carolina in 1916.  After service in World War I he returned to Chapel Hill and taught there until 1944 when he resigned to devote all of his time to writing.

Plays were Green’s favorite art form but he also wrote short stories, novels and poetry. In 1927, he was awarded a Pulitzer Prize for the play In Abraham’s Bosom.

His signature achievement was development of the outdoor drama (or “symphonic drama,” as he termed it).  Green’s best-known production, The Lost Colony, opened on Roanoke Island in 1937 and runs every summer.  Over time Green wrote 16 such plays, with productions staged in Florida, Virginia, Kentucky and Texas.

Green’s many honors include a designation by the General Assembly in 1979 as the state’s Dramatist Laureate. Outside the arts, Green demonstrated sympathy and compassion for African Americans and the underprivileged from an early age.  He was a lifelong champion of human rights and a dedicated opponent of war, lynching, capital punishment, chain gangs and prejudice.

His last home was “Windy Oaks,” south of Chapel Hill.

Visit: The Lost Colony is still performed each summer in Manteo. Our friends at Visit North Carolina have also put together an excellent guide to exploring outdoor dramas across the state.