On May 6, 1818, 11 years after Robert Fulton’s invention of the steamship, Otway Burns launched a similar vessel in North Carolina. 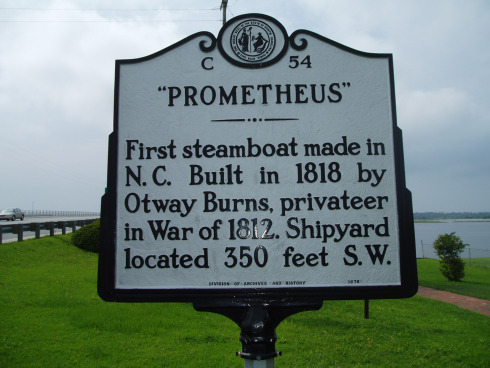 Burns, known for his privateering during the War of 1812, built the Prometheus at his waterfront lot, number six, at the mouth of the White Oak River in Swansboro. He attracted the attention of North Carolina newspapers as he strove to launch the Prometheus before the Henrietta, built that year in Fayetteville.

The steamship Prometheus entered service on the Cape Fear River by the summer of 1818, shortly before the Henrietta. The vessel operated a route between what’s now Southport and Wilmington, which took about four hours and cost passengers $1 each way.

Perhaps two of the most famous of the passengers on the Prometheus were President James Monroe and Secretary of War John C. Calhoun, who rode the steamship to inspect Fort Johnston in April 1819.