Here’s to the Land of the Longleaf Pine 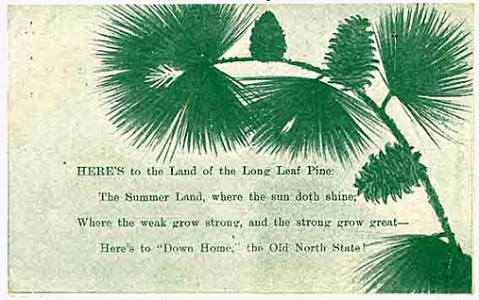 On May 21, 1957, the General Assembly adopted an official state toast.

The toast was first read by the Rev. Walter W. Moore in May 1904 in Richmond at a banquet hosted by the North Carolina Society of Richmond. Moore’s toast came from “The Old North State,” a poem, written by Leonora Monteiro Martin, which was reportedly commissioned for the event.

Martin, a writer who had lived in North Carolina, was living in Richmond with her husband, Harry Culver-Martin at the time.

Beginning in May 1904, lines of the poem appeared in newspapers in accounts of tributes and toasts given at other occasions. The poem became almost instantly ubiquitous in association with patriotic and nostalgic feelings for the state, and within a few years it appeared on postcards and in anthologies.

In the 1930s, Mary Burke Kerr, a music teacher in Sampson County, composed music for Martin’s poem, and in 1933 the General Assembly officially recognized Kerr’s composition with a resolution and requested that WPTF, a Raleigh radio station, began to play a recording to acquaint North Carolinians with it.

From that point, generations of North Carolina school children learned the song before the General Assembly officially recognized the combined creations of Martin and Kerr as the state toast in 1957.

The full text of the toast reads:

Here’s to the land of the long leaf pine,
The summer land where the sun doth shine,
Where the weak grow strong and the strong grow great,
Here’s to “Down Home,” the Old North State!

Here’s to the land of the cotton bloom white,
Where the scuppernong perfumes the breeze at night,
Where the soft southern moss and jessamine mate,
‘Neath the murmuring pines of the Old North State!

Here’s to the land where the galax grows,
Where the rhododendron’s rosette glows,
Where soars Mount Mitchell’s summit great,
In the “Land of the Sky,” in the Old North State!

Here’s to the land where maidens* are fair,
Where friends are true and cold hearts rare,
The near land, the dear land, whatever fate,
The blest land, the best land, the Old North State!