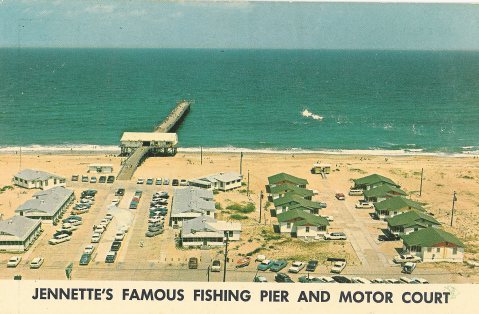 On May 22, 1939, work began on Jennette’s Ocean Pier in Nags Head, the first fishing pier on the Outer Banks.

The 750-foot wooden structure was built by Elizabeth City’s Warren Jennette, Sr., who purchased the former site of Camp Weaver, a WPA transient camp that housed workers who built sand dunes in the area. Some buildings were converted into overnight accommodations for fishermen.

The pier opened for business that summer with a snack bar, bait stand, guest rooms and restrooms for the public. Located across from Sam and Omie’s restaurant and near Whalebone filling station, the pier helped establish the business district in South Nags Head.

Jennette’s Pier suffered damage from sea worms, nor’easters, hurricanes and even a wayward shipwreck, and was rebuilt a number of times. But it was Hurricane Isabel in 2003 that caused its final demise. A new 1,000-foot state-of-the-art green pier with educational exhibits, wind turbines and concrete pilings was built to replace the old pier.

The new pier was dedicated in May 2011, with Governor Beverly Perdue taking part in the opening celebration. Now a facility of the North Carolina Department of Natural and Cultural Resources, Jennette’s Pier hosted nearly 200,000 anglers and sightseers last year.

Visit: Jennette’s Pier, now a unit of the North Carolina Aquariums system, is open to the public daily year-round.