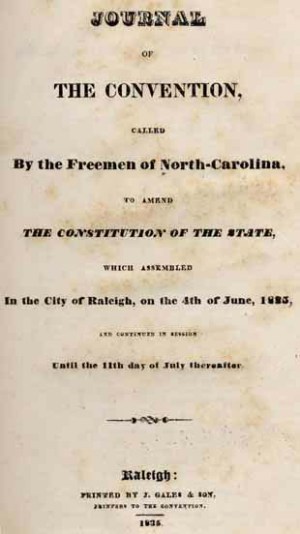 On June 4, 1835, a convention called to modify the North Carolina Constitution of 1776 opened at the First Presbyterian Church in downtown Raleigh.

The main impetus to change the state constitution was a growing divide between the eastern and western parts of the state. While by 1830 more North Carolinians lived in the western part of the state, eastern interests continued to dominate the General Assembly.

A special election was held in April 1835 to select 130 delegates to attend the convention in Raleigh.

After about five weeks of debate and votes, a slate of constitutional amendments was adopted. The main changes made by the convention had to do with elections and who could hold certain offices.

Under the new constitution, free African American men, who had previously been able to vote, were disenfranchised. Elections for the General Assembly shifted from being held annually to be held every other year, and the way each chamber’s membership was apportioned changed.

Balloting for governor shifted from the legislature to popular vote, the governor’s term was extended from one to two years, and all Christians, not just Protestants, became eligible to hold public office.