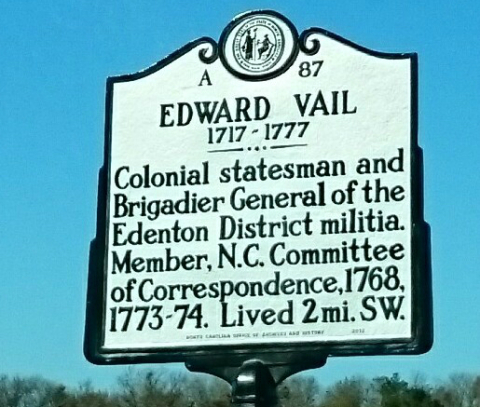 Vail’s public life began in 1754, when he helped raise troops in the French and Indian War and fought in the conflict in Virginia. Though Vail and his troops supported Governor William Tryon in the campaign against the Regulators in 1771, he subsequently became a supporter of the Revolution like many others who supported Tryon in the earlier conflict.

Vail represented Chowan County in the colonial assembly frequently between 1754 and 1774.

A well-respected member of his community and the colony overall, Vail was appointed to serve as a member of North Carolina’s Committee of Correspondence, along with other prominent revolutionaries including Cornelius Harnett, John Harvey, and William Hooper, in 1768, 1773 and 1774.

Work on the committee brought Vail in contact with leaders from other colonies who sought to increase communication among the diverse and far-flung population in an effort to unify the colonies.

Vail remained active in the militia throughout his life and in 1776 was appointed brigadier general of the Edenton District militia.