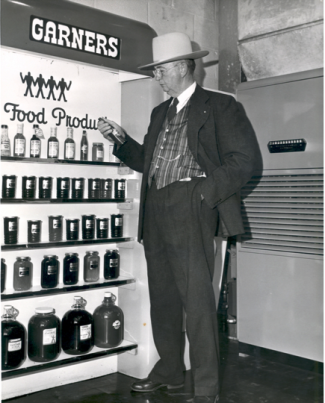 On June 9, 1953, the trademark ‘Texas Pete’ was registered to the TW Garner Company of Winston-Salem as a hot sauce for use on prepared foods. Made from hot red peppers, vinegar and salt, ‘Texas Pete’ was first used commercially in 1936 as a spicier version of the Garner family’s popular barbeque sauce.

Thad Garner got the original barbeque sauce recipe from a restaurant he bought at the age of 16. The sauce was made in the family kitchen and peddled throughout the state by his father Sam. Joined by brothers Ralph and Harold, the “four Garners” built a successful food business, which continues to thrive on the site of original Garner family home.

The Texas Pete name was chosen to evoke the spicy Mexican inspired foods of Texas. ‘Pete’ comes from Harold’s nickname. In the 1930s, with cowboys as popular movie icons, the Texas Pete trademark represented independent self-reliance.

During World War II, Texas Pete and other Garner products were sold to the U.S. government as soldier rations.

‘Texas Pete’ was also used as the name of a cartoon villain in the 1980s BBC Super Ted cartoon.