“Moonlight” Graham and His Place in Baseball Lore

On June 29, 1905, Cumberland County native “Moonlight” Graham played in his first and only Major League Baseball game. His story came to national attention after being incorporated into the 1989 hit film Field of Dreams.

Born Archibald Wright Graham in Fayetteville in 1879, Graham was raised there and in Charlotte, where he honed his baseball skills, playing with family and friends. He went on to a stellar career playing baseball at UNC, and began playing with a Charlotte minor league team while still studying medicine in Chapel Hill. 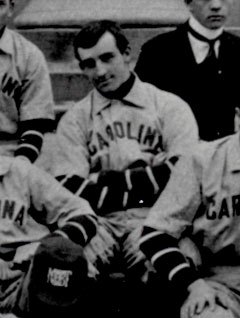 After stints with several minor league teams in North Carolina and New Hampshire, Graham signed with New York Giants in February 1905, while at the same time taking more medical courses at the University of Maryland.

In his only major league appearance, Graham played two innings as a right fielder. A ball was never hit in his direction, and he was on deck to bat when the game ended. Graham returned to the minor league shortly after that June 1905 game, and he moved to Chilsholm, Minnesota, for a job as a doctor in 1911, staying there until his death in 1965.

A decade later, author W. P. Kinsella happened to notice Graham’s story in The Baseball Encyclopedia, and included it in his 1982 novel Shoeless Joe, on which the movie Field of Dreams was based.