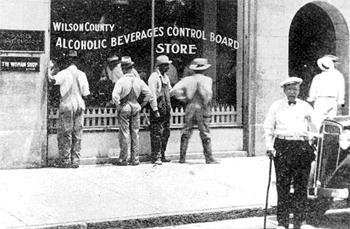 On July 2, 1935, the state’s first Alcoholic Beverage Commission—ABC, for short—Store opened in Wilson to an excited public. The store offered legal alcohol in the state for the first time in 26 years. On its first day of operation, shoppers purchased 825 bottles of liquor at a total cost of $1,003. There were no reports of rowdiness or drinking on the premises as had been predicted by prohibitionists.

Prohibition had been in effect in North Carolina since 1909, after voters approved a ban on the sale of alcoholic beverages in a referendum. North Carolina was the first state in the nation to approve such a measure and did so by the wide margin of 62 to 38 percent.

The rest of the nation joined North Carolina in 1920 with the passage of the Eighteenth Amendment, which made it illegal to manufacture, sell or transport intoxicating liquors anywhere in the country. The amendment was repealed in 1933, and North Carolina was one of only two states that refused to ratify that repeal.

In 1935, the General Assembly passed laws that granted local options for the sale of alcohol and set up the system of Alcoholic Beverage Control Boards to administer retail shops.