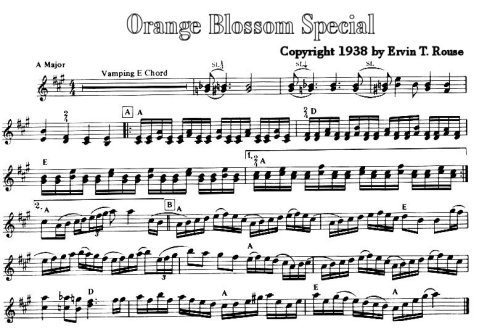 On July 3, 1981, Ervin Rouse, composer of “Orange Blossom Special,” the “unofficial anthem of bluegrass,” died. Plagued by alcoholism and mental illness, he was living on the edge of the Everglades and playing local taverns occasionally for tips.

Born in 1917 in Craven County, Rouse left home at the age of 8 to play in vaudeville shows. For a time he and his brother followed an evangelist and used their musical skills to energize audiences.

It was in Florida that Rouse became acquainted with the Orange Blossom Special, a passenger train operated from New York to Miami on the Seaboard Air Line Railway from 1925 to the early 1960s. The song, with its interplay of fiddle and harmonica, evoked the train’s sound and speed.

Recorded first by Chubby Wise, the song was brought to wide attention in 1942 by Bill Monroe and returned to the charts in 1965 when a version by Johnny Cash was released. When the “Man in Black” revived the song, Rouse took the stage to share the acclaim in one show. Cash supported him directly and through royalties.

The song endures and has been featured in the film “Urban Cowboy” and the TV series “Benny Hill.” The Atlanta Journal-Constitution named “Orange Blossom Special” one of 100 “Songs of the South.”