From Old Capitol Prison to U.S. Capitol: Zebulon B. Vance 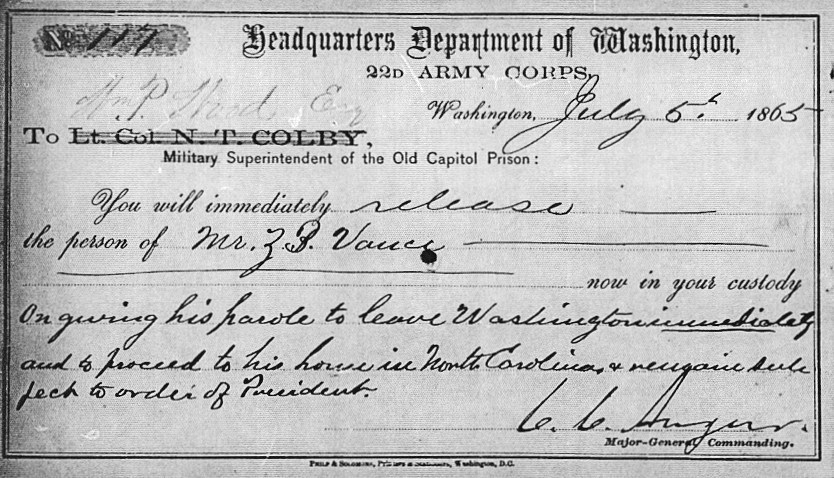 On July 5, 1865, ex-Confederate Governor Zebulon Baird Vance was paroled on his honor after imprisonment at the Old Capitol Prison in Washington, D.C.

However, Vance returned to Greensboro after agreeing to have no further obligations to the Confederacy.

After relinquishing his ties to the Confederacy, Vance contacted Union General John Schofield and offered to surrender himself. Schofield declined to arrest him, saying he had no orders to do so. Vance informed Schofield that he would return to his home in Statesville.

Vance’s stay in Statesville was short-lived. He on May 4 only to be arrested on the orders of General Ulysses S. Grant on May 13. By May 20, he was in Washington.

While he was imprisoned, his wife’s health, usually fragile, took a bad turn. Provisional Governor W.W. Holden sent a telegram on July 4 noting her ill health and asking for Vance’s release.

After the war, Vance practiced law in Charlotte. By terms of the Fourteenth Amendment he was prevented from taking the U.S. Senate seat to which he was elected in 1870, but he worked behind the scenes to develop the Conservative party until he was eligible for office in 1872.

Elected governor again in 1876, Vance vacated that office with two years left in his term in 1879 to join the U.S. Senate. He would serve there until his death in 1894.