Rayon Key to Success of Burlington Mills and Spencer Love 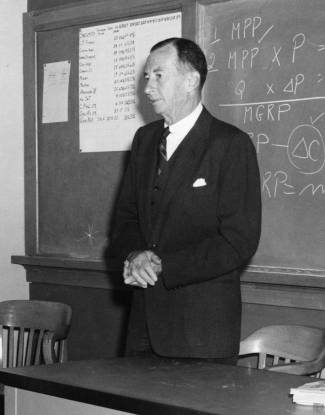 Though Love’s family roots were in North Carolina, he remained in New England until finishing his studies at Harvard and serving a brief stint in the Army during World War I. After he was unable to find work in Boston, Love moved to Gastonia and joined his grandfather and uncle in the textile business.

Love owned the Gastonia Cotton Manufacturing Company briefly in the late 1910s and early 1920s, but sold it and moved to Burlington where he set up a new textile operation. He had a penchant for experimentation and took a gamble on producing a new product, rayon.

That move helped Love’s Burlington Mills expand and evolve into Burlington Industries, the largest textile manufacturing company in the world and among the nation’s largest 50 corporations in the 1960s.

In addition to his business pursuits, Love was active in industry groups, civic organizations and state politics throughout his life. He died in 1962 and is buried in Greensboro.