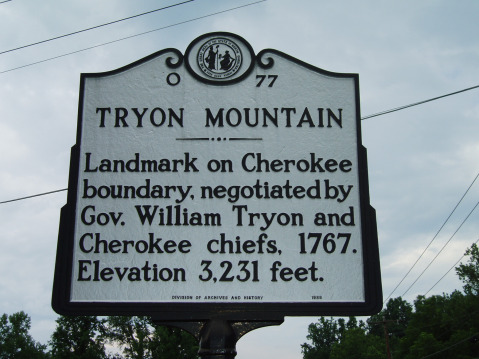 On July 13, 1767, a public proclamation made official a new boundary line delineating the western frontiers of the province of North Carolina from the Cherokee hunting grounds. The boundary mandated that white settlers west of the line should remove themselves by January 1768, and anyone wishing to trade with the Cherokees was required to obtain a license from the governor.

In 1766, John Stuart, superintendent of Indian affairs for the southern colonies, pressed Governor William Tryon to enter into negotiations with the Cherokees regarding extension of the boundary line. Tryon appointed commissioners to conduct the survey and mounted a personal military expedition to take part in the negotiations.

The Cherokees were flattered to receive the governor’s visit and gave him the title “Great Wolf of North Carolina.”

The commissioners began their work in June 1767 at the Reedy River in South Carolina. From there, with the assistance of the several Cherokees, they surveyed a line 53 miles north to a tree atop the peak that the Indians called the “great Mountain” and that the commissioners renamed Tryon Mountain.

It was agreed that the boundary would extend in a straight line into Virginia, but that that portion would by necessity remain unsurveyed.