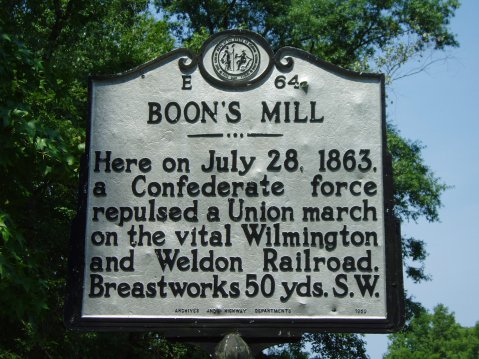 On July 28, 1863, a skirmish was fought at Boon’s Mill near Jackson. It marked the end of a Federal raid against Weldon, a major railroad hub linking the Deep South to Richmond.

The operation began three days earlier, when infantry under Maj. Gen. John G. Foster landed near Winton on the Chowan River. The next day they advanced toward Murfreesboro and defeated a Confederate force at Potecasi Creek.

The Union advance was slowed when a cavalry column under Col. Samuel P. Spear assigned to strike Weldon was delayed after losing a pontoon bridge in a storm. That, in turn, gave the Confederate military time to dispatch Brig. Gen. Matt Ransom’s brigade from Petersburg as reinforcements.

Ransom established a position at Boon’s Mill with the few companies that had arrived at that point. In the meantime, Spear reached Winton and headed for Weldon. Ransom and his staff were almost captured as they encountered the Federals, but raced back to their line. Spear made little effort to take the position, and the confrontation settled into an artillery duel which was ended by a storm.

Casualties were light on both sides. Spear retreated, and the railroad line was safe again for the moment.