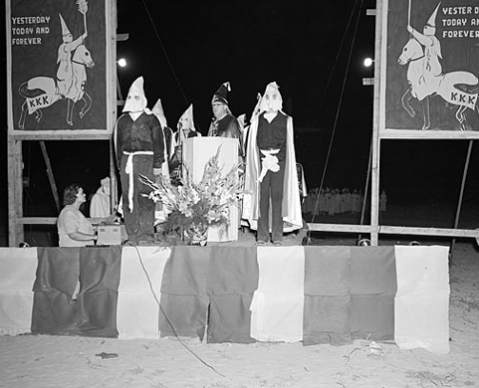 On July 30, 1952, Thomas L. Hamilton, Grand Dragon of the Association of Carolina Klans (ACK) was sentenced to four years in prison for kidnapping and assaulting Evergreen Flowers, an African American woman from Chadbourn.

Hamilton’s arrest in May 1952 was in many ways the culmination of a larger crackdown on the Ku Klux Klan in Columbus County and Horry County, S.C. by federal, state and local state authorities that had been underway since the beginning of the year.

Hamilton and the mob he led apparently targeted Flowers because a Klansman claimed that he saw Evergreen’s husband Will have sex with Bessie Page, a white woman who was Flowers’s neighbor in Chadbourn.

After first pleading not guilty in the case, Hamilton changed his plea to guilty on the first day of his trial on July 22. From prison, where he would ultimately serve only 17 months of his four-year sentence before being paroled, Hamilton wrote a letter repudiating the organization he played such a central role in:

All my friends everywhere should disband the Ku Klux Klan…. I am through with [it] and believe all my former associates will best serve themselves and society as a whole by taking a similar stand.

After leaving prison in 1954, Hamilton and his wife returned to their native South Carolina where they lived with their daughter. Hamilton, later ordained a Baptist minister, died in 1976.

The Tabor City Tribune and Whiteville News Reporter, two weekly newspapers in Columbus County, were awarded the 1953 Pulitzer Prize for Meritorious Public Service for the coverage of the case and their role in helping to bring down the Klan’s strong presence in the area.