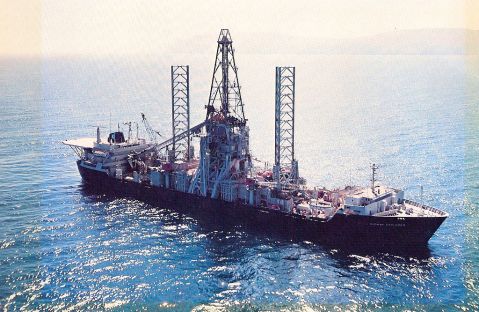 On August 8, 1974, the CIA and U.S. Navy recovered a portion of the Soviet submarine K-129 from the bottom of the Pacific Ocean using the purpose-built ship Hughes Glomar Explorer. The sub, armed with three nuclear-armed ballistic missiles, had sunk six years earlier.

The operation, known as Project Azorian and personally approved by President Richard Nixon, was largely the brainchild of Carl E. Duckett, a Swannanoa native and the CIA’s deputy director for science and technology at the time.

Massive cost overruns, the high probability of failure and a détente between Moscow and Washington threatened to cancel the project, but Nixon and his national security team remained convinced that enormous amounts of intelligence could be gleaned from operation and it moved forward. The cover story for the mission was a seafloor manganese mining expedition by one of Howard Hughes’s varied businesses.

Finally arriving near the K-129 wreck in July 1974, recovery operations began on August 1 under almost constant surveillance from two nearby Soviet ships. After the sub’s remains were secured in the HGE’s massive hull, the ship sailed for Hawaii on August 9.

Many of the details of the project remain classified so it has been difficult to gauge the project’s success. But since most of the parts of ship that would have had significant intelligence value, including the ballistic missiles, fell back to the ocean floor, many consider Project Azorian largely a failure.

The National Security Security Archive has a detailed overview of the project, including related primary documents from the CIA.