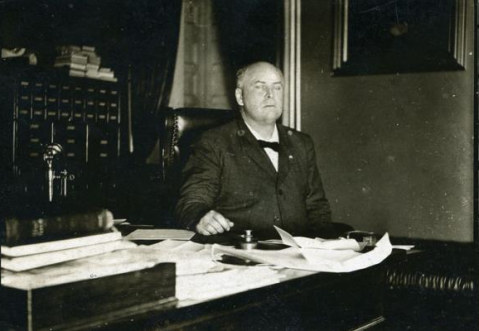 On August 11, 1854, Governor Robert B. Glenn was born in Rockingham County.

After being educated at Davidson College and Richmond Hill Law School, Glenn practiced law in Rockingham and Stokes Counties. His entry into politics came in 1880 when he was elected to a single term in the General Assembly, representing Stokes County.

In 1885, Glenn moved his law practice to Forsyth County and served as U.S. attorney for the western district of North Carolina before returning to politics as a state senator in 1899. While in the General Assembly the second time, he spoke widely on behalf of white supremacy and supported the successful efforts in the legislature to disfranchise black voters.

Glenn ran against the Democratic machine in the 1904 gubernatorial primary for that party and went on  to win the general election by a wide margin.

Glenn focused his term in office on expanding public education and on increasing funding for hospitals, public health and care of the insane. He successfully spearheadeda campaign to ban the sale and manufacture of liquor, the “crowning act of my administration,” in his words.

After leaving office, Glenn returned to his law practice in Winston-Salem and served on an international boundary dispute commission. He died in 1920.