David Schenck and the Battlefield at Guilford Courthouse 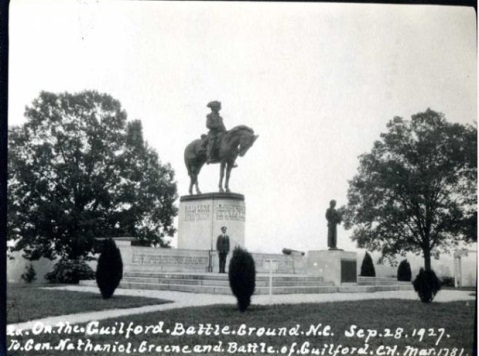 Born in 1835 in Lincolnton, Schenck and his family moved to Greensboro for his job as a lawyer for the company that became Southern Railway. Immersing himself in local history almost immediately after moving to the area, he showed a special interest in the Battle of Guilford Courthouse.

Schenck traversed the ground with locals, inquiring as to the specific pieces of property associated with the 1781 engagement. He knew that, if the battlefield was not protected, it would be lost to encroaching development.

In 1886, Schneck recorded in his diary that he decided to buy the land to, in his words, “redeem the battlefield from oblivion.” That same day he purchased 30 acres of the battlefield to achieve that end.

The following year Schenck organized the Guilford Battle Ground Company. Although he died in 1902, the organization carried on and, through its actions, the battleground was donated to the U.S. Department of Interior, which organized it as the Guilford Courthouse National Military Park in 1917.

The battlefield was the first from the Revolutionary War to be protected by the federal government. The Guilford Battleground Company, as Schenck’s organization is known today, continues to purchase property associated with the site and donate it to the National Park Service.

Visit: Guilford Courthouse National Military Park, north of downtown Greensboro, continues to be open to the public to this day.