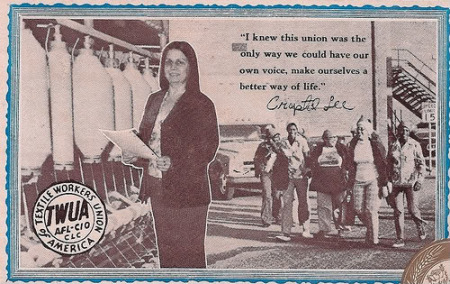 On August 28, 1974, workers at the J. P. Stevens plant in Roanoke Rapids voted to unionize. The vote to affiliate with the Amalgamated Clothing and Textile Workers Union was the culmination of efforts by Crystal Lee Sutton, who worked for $2.65 per hour folding towels in the plant. The vote was an important one in North Carolina, which was the least unionized state in the nation at the time. The story of Crystal Sutton is depicted in the 1979 film, Norma Rae.

“Management and others treated me as if I had leprosy,” she later recalled. The turning point, in real life as in the film, was when Sutton wrote “UNION” on a scrap of cardboard and stood atop her work station.  One by one coworkers cut off their machines and the plant became quiet. Sutton was fired by J. P. Stevens but later, under court order, was rehired with reinstated back wages. She soon left, however, to become a full-time organizer.

Sally Field won an Academy Award for Best Actress for her portrayal of Sutton. The real Crystal Sutton, who deposited her papers at Alamance Community College in Burlington, died in 2009.