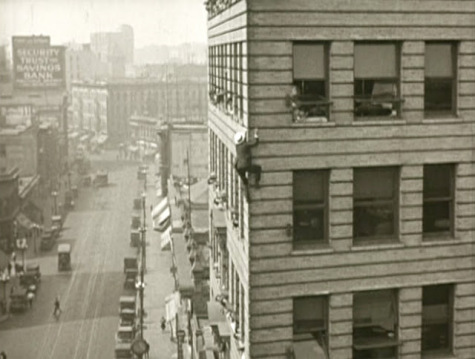 On September 1, 1896, Bill Strother, who became nationally acclaimed as the “Human Spider,” was born in Wayne County.

Strother acquired his nickname in Kinston in 1915. Frustrated that handbills he ordered to advertise a real estate auction he was organizing did not arrive in time, Strother indicated to a fellow diner at a lunch counter that he’d now have to climb the courthouse walls to advertise the sale. The diner, who happened to be the editor of the Kinston Free Press, published a story about the proposed climb and thousands showed up to watch.

The PR stunt worked, and that day Strother sold a fortune in real estate, while also unknowingly launching his career as the Human Spider. For a while Strother only climbed buildings to advertise real estate sales, but in December 1917 he began climbing just for climbing’s sake.

In 1922, silent film star Harold Lloyd saw Strother climb a building in Los Angeles. The chance meeting resulted in movie called Safety Last!, in which Lloyd’s character climbed a building to win over a girl. Strother played Lloyd’s friend “Limpy” Bill in the 1923 release. He continuing climbing buildings across the country before retiring after a fall in 1930.

Strother died in a car accident in 1957.