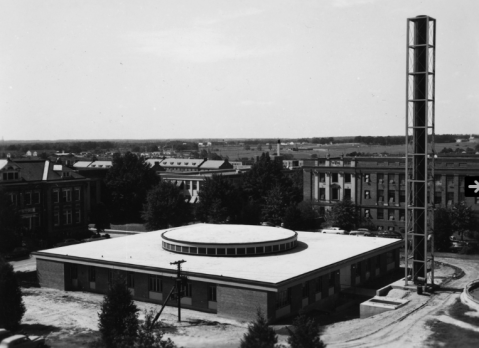 The roots of NCSU’s nuclear engineering program go back to 1949, when Dean Harold Lampe recruited Dr. Clifford Beck from Oak Ridge National Laboratory to oversee creation of the college’s original reactor. The Atomic Energy Commission approved the project in 1950, and Burlington Laboratory was built on campus to house the 10-kilowatt reactor, called R-1.

Corrosion-related fuel leaks soon caused its shutdown, but in 1957 the school upgraded to a more powerful reactor, called R-2. Another upgraded model, called R-3, went online in 1960 and operated until 1973, when NCSU’s 1-megawatt PULSTAR reactor was constructed. The university received a federal grant in 2010 to upgrade its PULSTAR to 2 megawatts of energy, allowing nuclear engineering students to conduct more complex experiments.

The old R-3 reactor was dismantled and its control panels given to the North Carolina Museum of History in 1984.