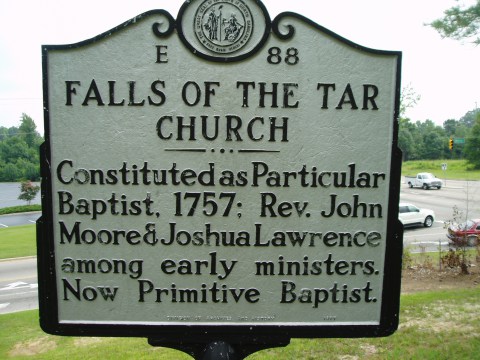 On September 10, 1778, Joshua Lawrence, Baptist minister and one of the founding members of the Primitive Baptist movement, was born on his family’s farm in Edgecombe County.

Lawrence was called to the ministry in 1801, when he was 23. He became pastor of the Falls of the Tar Baptist Church, later founded the Tarboro Baptist Church and led that church until its division in 1829. Though he was known for his commanding presence in the pulpit and as an eloquent preacher, he didn’t have any formal training as minister.

In 1803, Lawrence became a delegate to the Kehukee Baptist Association, and became embroiled in the struggle between the missionary and anti-missionary supporters within the North Carolina Baptist movement. Lawrence believed that it was important to preserve “the Christian religion in its primitive state,” and insisted that those in the ministry should not use their permission for material gain.

The author of a number of pamphlets supporting what would later become the Primitive Baptist Movement, Lawrence supported the idea of cutting ties with the missionary Baptist movement that would later form the Baptist State Convention of North Carolina.

Lawrence continued to preach until his death in 1843.