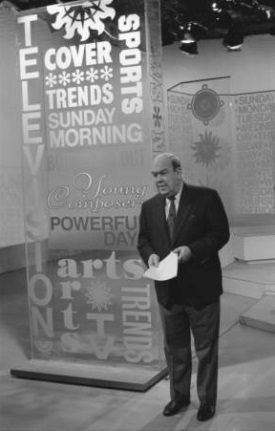 The winner of 12 Emmys and two Peabody Awards, Kuralt showed early promise as a writer. Voted “Most Likely to Succeed” by Charlotte’s Central High School class of 1951, the budding writer attended UNC, where he was editor of The Daily Tar Heel.

Kuralt’s first professional job was with the Charlotte News, where he wrote an award winning column called “Charles Kuralt’s People.” In 1957, at age 23, he became the youngest correspondent ever hired by CBS News.

A decade later, during a period of war and riots, he experimented with a good-news segment on The CBS Evening News with Walter Cronkite. Called “On the Road,” the feature ran for more than 20 years. During that time, Kuralt and his crew wore out six campers, crisscrossing the country’s back roads and telling stories about ordinary Americans. He later anchored CBS News Sunday Morning before retiring in 1994.

Kuralt died in July 1997, at age 62, of complications from lupus. At his request, he was buried in the Old Chapel Hill Cemetery on UNC’s campus.