The Rutherford Trace and the Destruction of Nikwasi 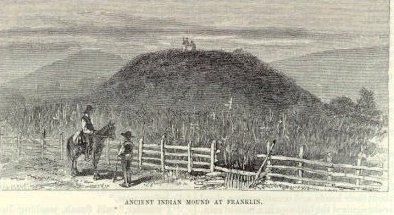 On September 10, 1776, during the American Revolution, North Carolina General Griffith Rutherford attacked and burned the Cherokee town of Nikwasi as part of what became known as the “Rutherford Trace.” It was part of a united effort by North Carolina, South Carolina and Virginia to weaken the Cherokee Indians before they could fully ally and coordinate attacks with British troops.  The campaign also was retribution for the punishment enacted by the native people against the newly arrived settlers in the west.

Nikwasi covered approximately 100 acres in what is now Macon County, and was a spiritual and ceremonial center for the Cherokee, who inhabited it until 1819 when they were forced off their lands. The present day town of Franklin was built on it, and a large mound in the commercial district is all that remains of the former Cherokee presence.

The expedition decimated many Cherokee towns in just a few weeks. The destruction of crops, livestock and food stores effectively ended the military threat of the Cherokee. As refugees, surviving over the winter on wild game, nuts and fruits, the remaining Cherokee signed peace treaties the following year.