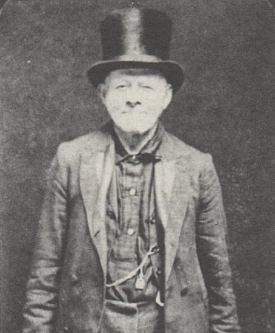 Known as the “Cherry Bounce King,” Owens was renowned for the delightful mixture of whiskey, honey and cherries that he made at his “castle” on Cherry Mountain.

Described as a fearless yet energetic Irishman, Owens achieved success quickly. People from all over the South visited him to taste his celebrated beverage.

Owens was also an infamous fixture in the local courthouse. Vehemently opposed to taxes on alcohol, he believed that he owed nothing to the government after fulfilling his civic duty as a Confederate soldier. Often arrested for his activities, Owens was occasionally acquitted for minor crimes, but didn’t always manage to escape the long reach of the law. He frequently had to pay fines or spend time in jail.

At one point he was locked up for an entire year.

Despite the risks that came with it, Owens continued to distill Cherry Bounce and every summer he hosted lively gatherings at Cherry Mountain to celebrate the cherry harvest.

A colorful local figure who embodied the vitality and grit of Appalachia in the aftermath of the Civil War, Owens didn’t stop making moonshine until he was sent to prison in his 70s.