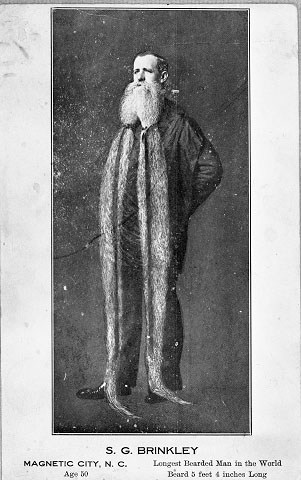 On September 21, 1850, Sam Brinkley, who became known for one of the world’s longest beards in the early 20th century, was born near Burnsville in Yancey County.

As an adult Brinkley stood at 6 feet, two inches with a beard that measured in at 5 feet, 4 inches at its peak length. Notoriety came with the remarkable growth of his beard. He began by exhibiting it to the curious, and he went on tour with the Barnum and Bailey Circus. He reportedly earned thousands of dollars by charging people to see his beard, which he kept tucked in a pouch.

Brinkley was a late bloomer when it came to facial hair. According to newspaper accounts, until he was 21, he had no real beard to shave. By 23, the growth had reached the astounding rate of a full beard in a week’s time. One article reported that the beard was entirely natural, not the result of restorers or invigorators. Another called it “soft and beautiful.” For decades Brinkley was known as the world’s expert on the cultivation of beards.

He died in 1929 from complications of tonsillitis, and he is buried at Buladean in Mitchell County with a striking photo featuring his legendary beard recessed into his tombstone.