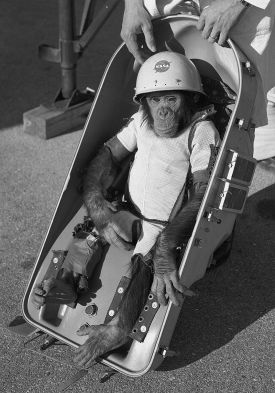 On September 25, 1980, Ham, the “astrochimp,” arrived at the North Carolina Zoological Park in Asheboro.

Ham, an acronym for Holloman Aero Med, was born in July 1957 in the French Cameroons in West Africa. He was taken to Holloman Air Force Base in New Mexico when he was about 2-years-old. Space researchers at Holloman began using animals, initially monkeys and mice, in the late 1940s to test whether they could send a living creature into space and return it to Earth alive.

In January 1961, Ham became the first chimpanzee in space aboard the Mercury Redstone rocket on a sub-orbital flight.

Following his mission Ham was found to be slightly fatigued and dehydrated, but otherwise, in good health. His flight heralded the launch of America’s first human astronaut, Alan B. Shepard Jr., later that year.

Ham spent many years alone on display at the Washington Zoo, but was moved to North Carolina where he could live among other chimpanzees.

After his death in 1983 his skeleton was removed for further study and his other remains were buried at the International Space Hall of Fame in Alamogordo, New Mexico.

Visit: One of the largest “natural habitat” zoos in county, the North Carolina Zoo attracts more than 700,000 visitors annually.