A Pirate’s Life Was His, Stede Bonnet’s

On September 27, 1718, Colonel William Rhett captured the so-called “Gentleman Pirate” Stede Bonnet, after a six-hour battle near the mouth of the Cape Fear River.

He was born in 1688 in Barbados. Orphaned at a young age, Bonnet inherited property, including a sizable plantation, held by a guardian until he reached majority. In 1709 Bonnet married Mary Allamby, daughter of a wealthy planter. By 1715 the couple was living in the Parish of St. Michael, where Bonnet held the rank of major in the militia. In 1717 Major Bonnet gave up his life among the Barbadian planter elite, deserting his family to become a pirate.

Instead of capturing a vessel, Bonnet launched his pirating career in the way in which he was accustomed to doing business—he purchased and armed a ship and hired a crew, offering wages. The novice pirate and his crew sailed the Revenge to the shipping lanes off of the North American coast and began plundering vessels. Blackbeard, in league with Bonnet for a time, captured the ship that he would name Queen Anne’s Revenge while commanding Bonnet’s Revenge. The two pirates joined forces again in March 1718, and Bonnet was aboard the Queen Anne’s Revenge during Blackbeard’s weeklong blockade of Charleston. Following Blackbeard’s grounding of the Queen Anne’s Revenge, Bonnet went to Bath to secure a pardon from Gov. Charles Eden after which he renamed his ship the Royal James. Bonnet, however, immediately returned to piracy, taking over a dozen prices along the east coast that summer.

Bonnet, like many pirates of the age, knew that the Cape Fear estuary offered safe places in which to rest and to careen and repair ships. In August 1718, expecting lengthy repairs, Bonnet established a base near modern Southport. Responding to piratical threat to South Carolina, Gov. Robert Johnson, knowing of Eden’s liberal pardoning of pirates, sent Col. William Rhett to the region in search of pirates. He spotted Bonnet’s vessels at dusk on September 26 and a fierce battle ensued at daybreak. Bonnet and his surviving crew surrendered after about six hours. The fight was the largest and bloodiest of pirate conflicts in the colony’s waters. All but three of the captured crew were executed in South Carolina on November 8. Bonnet, who escaped, was recaptured, and tried. He was hanged in Charleston on December 10, 1718, ending the “Golden Age of Piracy” in North Carolina. 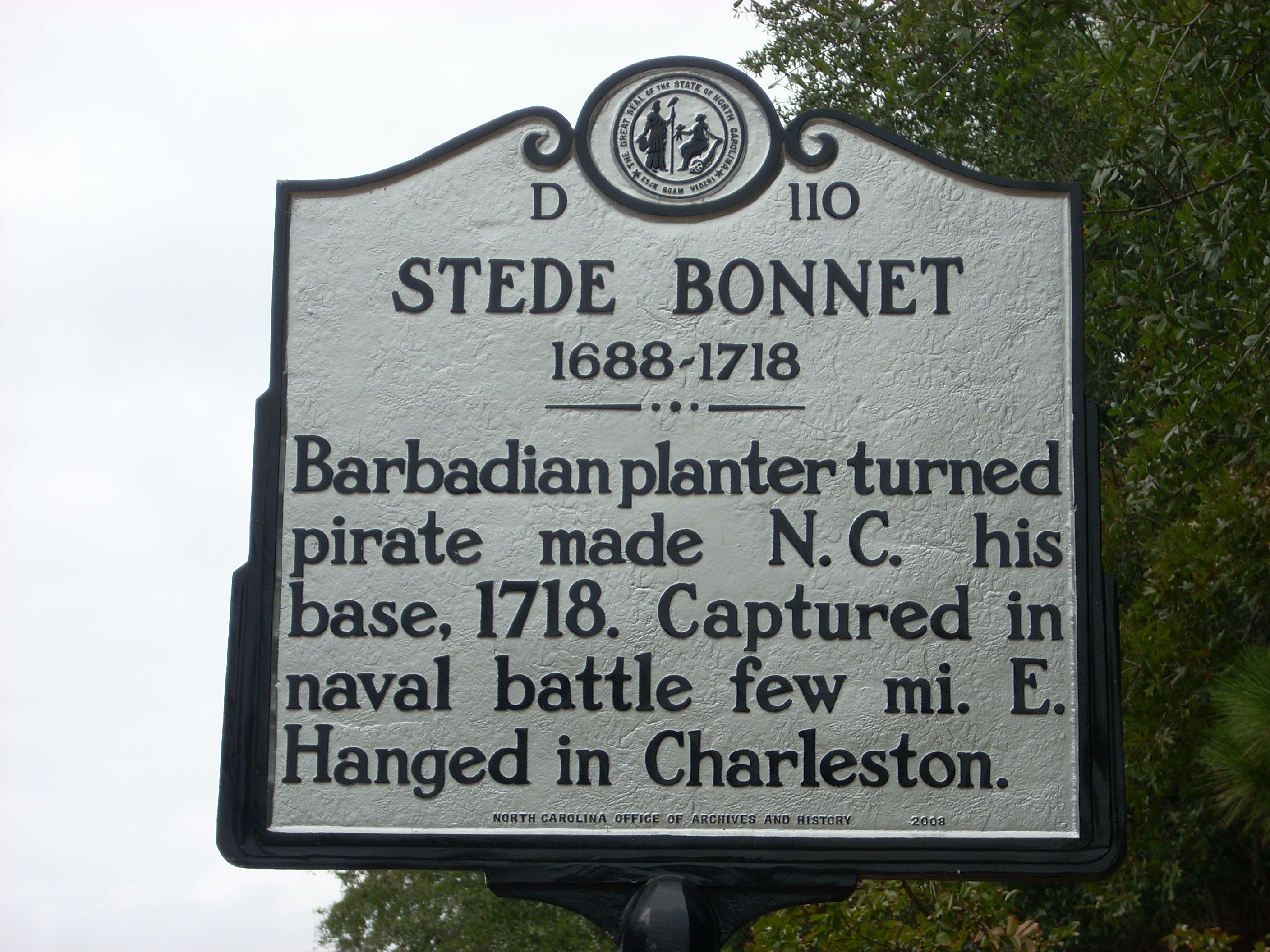 Visit: The North Carolina Maritime Museum in Southport tells the story of Bonnet and other pirates that operated in the Lower Cape Fear.