Francis Nash Mortally Wounded at the Battle of Germantown 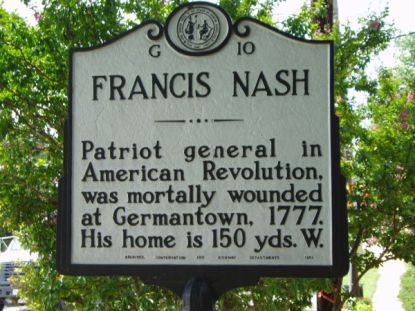 On October 4, 1777, Francis Nash, brigadier general of the North Carolina Continental Troops under General George Washington in the American Revolution, was mortally wounded by a cannon ball at the Battle of Germantown, near Philadelphia.

Born in Virginia in 1742, Nash moved to North Carolina before 1763. Francis Nash lived in Hillsborough with his brother, Abner, who would later serve as governor of North Carolina. Nash worked as a lawyer and merchant, was clerk of court and an assemblyman before the Revolutionary War began.  He served as lieutenant colonel and colonel of the First North Carolina Regiment of Continental troops before being promoted to brigadier general of the North Carolina Continental Troops.

Private Hugh McDonald described Nash’s fateful injury, “We lost our General, Frank Nash, who was killed by the cannon ball which struck his horse behind his right thigh, and passing through, cut off his right thigh.”  In army orders on the day of Nash’s funeral, Washington urged all officers to “attend and pay their respect to a brave man who died in defense of his country.”  Nash County is named in his honor.

Other resources related to Francis Nash:

For more about North Carolina’s history, arts and culture, visit the N.C. Department of Cultural Resources online. To receive these updates automatically each day, make sure you subscribe by email using the box on the right, and follow us on Facebook and Twitter.