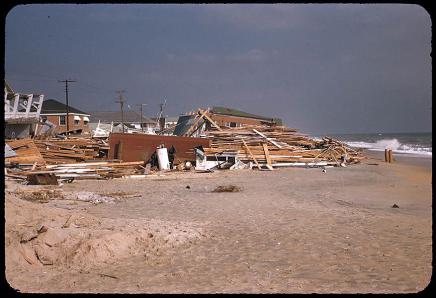 Devastation was widespread but nowhere was the impact more severe than on Long Beach (present-day Oak Island), where a 17-foot storm surge swept away 352 of the 357 structures on the island. The dramatic surge was, and remains, singular in North Carolina’s recorded history.

Hazel was the only Category Four hurricane of the twentieth century to strike North Carolina. Its winds topped 140 miles per hour. After landfall it tracked inland, and battering winds cut a wide swath northward toward Raleigh. High winds toppled trees, ripped roofs, and tore down signs and power lines across the state.  Hazel was responsible for 95 deaths in the U.S., including 19 in North Carolina. Hazel remains the standard by which other North Carolina hurricanes are measured.

Other resources related to Hurricane Hazel: