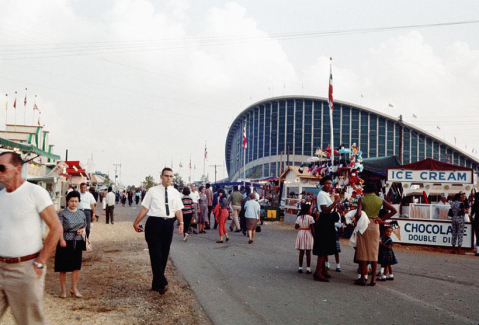 On October 16, 1961, the Livestock Judging Pavilion at the North Carolina State Fair was dedicated and renamed the J. S. Dorton Arena, honoring the memory of “Doc” Dorton, a longtime fairgrounds manager who had died earlier that year.

Internationally recognized for its revolutionary architectural design, the arena opened in 1952. Its soaring, criss-crossed parabolic arched roof amazed fairgoers right from the start. The innovative creation was the work of Matthew Nowicki, a Polish architect who was then head of of the architecture department at what is now N.C. State’s School of Design.

Nowicki had sketched the building’s preliminary drawings in 1950, prior to his departure for India where he was engaged in planning the new Punjab capital city of Chandigarh. Returning to the United States, he was killed in a plane crash in Egypt, and Raleigh architect William Dietrick carried out the construction of Nowicki’s visionary work. Recipient of the first American Institute of Architects Honor Award in 1953, and recognized as a National Civil Engineering Landmark, the arena was listed in the National Register of Historic Places in 1973 for its exceptional national significance only 21 years after its construction.