On October 25, 1969, the Malcolm X Liberation University opened in Durham. Founded by black activist Howard Fuller and named for then recently-slain civil rights leader Malcolm X, the school was founded in response to protests by students at Duke University over the lack of an African American studies program there. The school was first housed in what was once a hosiery mill on Pettigrew Street. 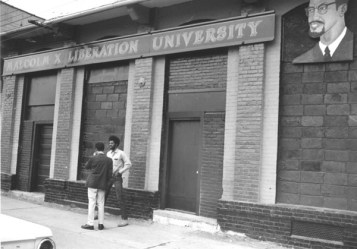 In its first year, the university had 12 students and 40 teachers. The curriculum expressly focused on meeting the needs of black students to further the cause of the black liberation movement. In a two-year program, students took courses on the history of Africa, slavery and colonialism and then received technical training to prepare for careers that focused on civil rights.

The school struggled financially despite some strong initial support from the Episcopal Church. It moved to Greensboro in 1970, leaving a small presence in Durham, and closed its doors in 1973. Fuller later attributed the school’s failure to an overemphasis on Africa as an important factor in the lives of American blacks.