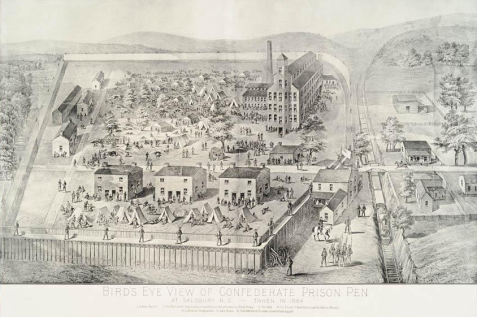 On December 9, 1861, the Confederate prison at Salisbury took in its first Yankee prisoners.

Early in the war, the Confederacy purchased an old cotton mill in southeast Salisbury for $15,000 and converted the structure into a place of confinement. Many of the incarcerated spent their time writing, whittling or playing baseball. These constituted some of the first baseball games played in the South. One prisoner noted that early life within the prison was “more endurable than any other part of Rebeldom.”

In time, however, the Salisbury prison reached capacity. In the autumn of 1864, it contained almost 7,000 prisoners, far more than the facility was designed to accommodate. Statewide supply shortages and rampant disease led to a surge in death rates, forcing guards to prepare mass graves for deceased inmates and casualties from nearby hospitals.

Near the close of the war, conditions at the prison convinced leaders to conduct prisoner exchanges, the most notable of which took place in February 1865. In April of that year, General George Stoneman’s Union troops set fire to the prison, which had been abandoned and converted into a supply depot. Only the garrison house survived from the original prison camp, along with a few artifacts including a tattered Confederate flag.