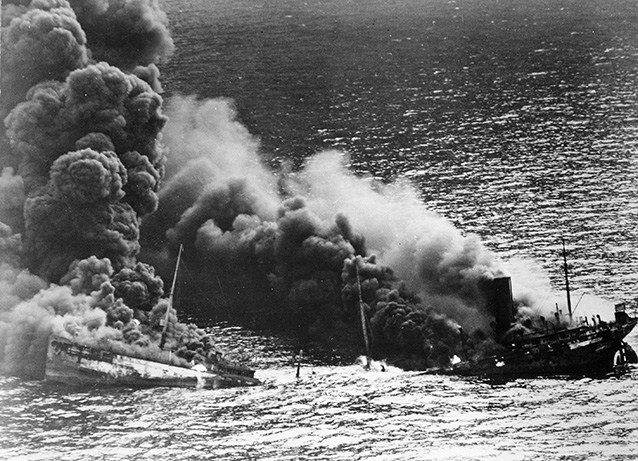 A tanker sinking off the Outer Banks after being hit by a U-boat. Image from the National Park Service.

On January 19, 1942, a German U-boat, designated U-123, attacked three ships north of Cape Hatteras. The U-boat was part of what was called the “Second Happy Time,” a campaign during which Axis submarines attacked merchant vessels along the Atlantic coast.

In the early morning hours, the American passenger-freighter City of Atlanta was sunk and survivors were left floating in the icy water; only three crewmen lived. Just before dawn, the U-123 slipped into a group of Allied ships and attacked.

The American tanker Malay was damaged and disabled by gunfire from the U-123’s deck guns. The U-boat then torpedoed a nearby Latvian freighter, killing two of her 32 crewmen and leaving her in to sink.

The U-123 returned to finish off the wounded Malay, hitting her with its last torpedo before it headed east for home. The Norwegian tanker Kosmos II tried unsuccessfully to ram the fleeing U-boat as it escaped.

The tanker Malay, although damaged by cannon fire and a torpedo, survived the attack with the loss of four of her 34 crewmen. The Latvian freighter was abandoned by her crew and floated northward for several days before finally sinking somewhere off Oregon Inlet.

Visit: The Graveyard of the Atlantic Museum in Hatteras tells the story of “Torpedo Junction.”