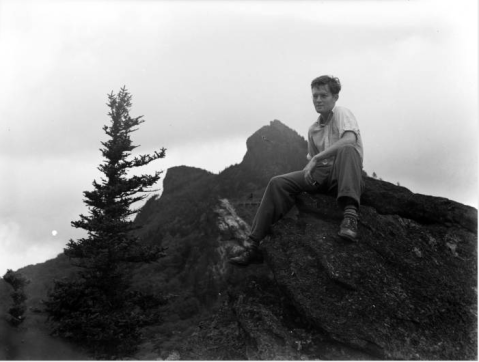 On February 19, 1921, developer, conservationist and photographer Hugh Morton was born in Wilmington.

Morton was instrumental in supporting many of the attractions enjoyed by residents of and visitors to the Tar Heel State. He served as the first president of Wilmington’s Azalea Festival, and was influential in raising funds to bring the battleship USS North Carolina to that port city. He advocated saving the Cape Hatteras Lighthouse by use of artificial seaweed.

Morton is perhaps best-known as the developer of Grandfather Mountain, which he inherited in 1952. He was responsible for the construction of the “Mile-High Swinging Bridge” and under his leadership, the site grew to become one of the most popular in the state.

He gained notoriety for his fight to keep the Blue Ridge Parkway from crossing Grandfather Mountain and spoiling its aesthetic appeal. The result was the Linn Cove Viaduct, an engineering marvel coursing around the mountain.

Morton was part of the post-World War II era of tourism development in North Carolina and was friends and colleagues with notables from across the state. He took close to a quarter-million photographs which are now part of the North Carolina Collection Photographic Archives at UNC-Chapel Hill.