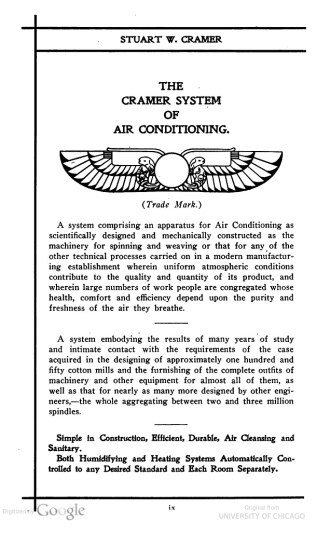 On May 17, 1906, Stuart Cramer coined the term “air conditioning” during a speech in Asheville.

Born in Thomasville and trained as an engineer, Cramer contributed significantly to the cotton mill industry by using his engineering and invention skills.

Cramer invested his profits back into his own mills, especially those in the community that came to bear his name, Cramerton.

Though he got his start in cotton, Cramer is best known for the role he played in the development of air conditioning. The holder of more than 60 patents, he pioneered humidity control and ventilating equipment for cotton mills and installed scores of such systems in plants across the South.

In a paper read before an American Cotton Manufacturers Association convention in May 1906, Cramer was the first to use the term “air conditioning.”

Though credit for the invention of air conditioning does not belong to one person, the biographer of industry giant W. H. Carrier attributes 11 technological advances and “outstanding work which later had a large part in the air conditioning industry” to Cramer.