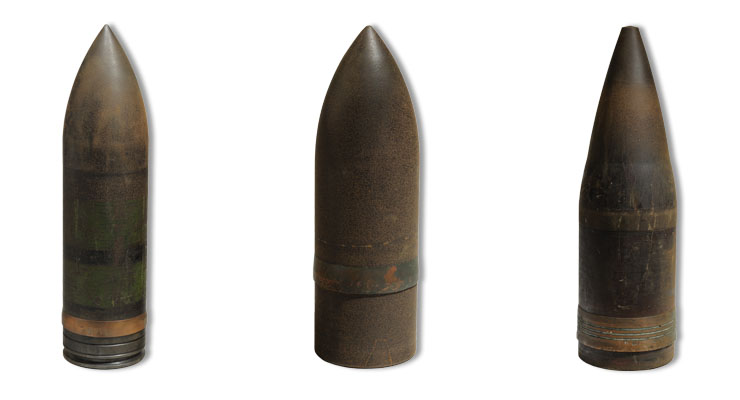 Earlier this month we discussed the role of Raleigh Iron Works in the preparedness movement and the various government contracts they fulfilled during the course of the war. Today, the North Carolina Museum of History shares images of some of the projectile-types produced by the company, which are still entrusted to their care to this day.

These shells were donated to the museum’s precursor, the Hall of History, in the fall of 1915. One of the shells, a seven-inch target practice projectile, was manufactured by North Carolina native and secretary of the navy Josephus Daniels. Secretary Daniels, with his own hands, constructed the shell “from the pig iron to the finished and painted projectile,” according Raleigh’s State Journal. It was a nice PR opportunity for Daniel’s to demonstrate the depth of his support for the preparedness movement.

The shells were all initially displayed in the Hall of History alongside munitions manufactured by the same company for the Confederacy back in 1864. The World War I examples included five-, six-, seven-, and eight-inch examples, and all were from the first contract fulfilled by Raleigh Iron Works.

Over one hundred years later, the projectiles will go back on display for our upcoming World War I exhibit. Come by the North Carolina Museum of History beginning April 8, 2017 to see one in person! For more information on the exhibit, follow this link.