Artifact of the Week: Prosthetic Arm 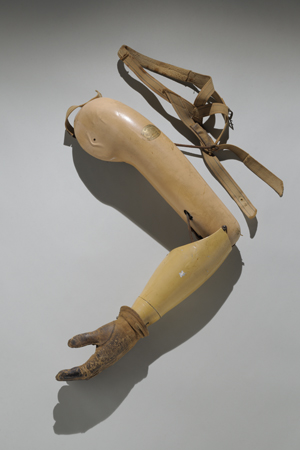 Davie County native Isaac Enos Winfrey, a private in the 119th Infantry Regiment, was hunkering down for a rest in a trench near Ypres, Belgium, on August 31, 1918, when a German artillery shell made a direct hit on his position. Severely wounded, Private Winfrey was rushed to a British casualty clearing station where a doctor surveyed his condition.

Several cuts streaked across the right side of his head. Another cut was found on his chest near his heart, a fortuitously placed pocket mirror having deflected a more serious blow. Shell fragments had shattered his right wrist, but it was his left arm, shattered between the elbow and shoulder, that concerned doctors most. Waking from sedatives some time later, Winfrey found his arm amputated from the shoulder.

The young man—he was only twenty-three—spent the remainder of the war in a hospital in England and caught a ship for home in mid-December. Back in the states, his medical treatment continued, and he was admitted to Walter Reed Hospital in Washington, D.C. until his honorable discharge on March 11, 1919.

Winfrey returned to Winston-Salem, where he had been employed by the Chatham Blanket Mill prior to being drafted in September 1917, and established a local grocery operation with his brother Carl. In December 1921, Winfrey married Jennie Griffith, and the couple went on to have three children. Despite the loss of his arm, he was a lifelong farmer and engaged in a variety of business ventures.

As for the prosthetic arm pictured here, it was manufactured by a company out of Kansas City, Missouri, called Carnes Artificial Limb Company. Winfrey often only wore it during special occasions due to its limited functionality and discomfort. For much of his life, the undaunted veteran simply learned to accomplish most tasks with his remaining arm, overcoming the pain and mobility limitations his right wrist had also incurred during the blast. For the sacrifices he made that August day near Ypres, Winfrey was awarded the Purple Heart.