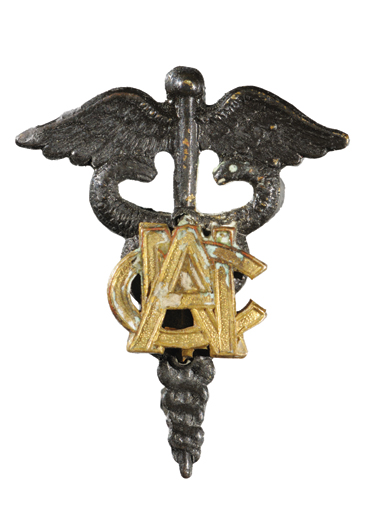 Women who were accepted into the Army Nurse Corps wore two different uniforms, an indoor version and an outdoor version. The outdoor uniform—consisting of a long skirt and jacket made of blue-serge, a white or navy blue long-sleeve collared shirt, a blue wool hat, and brown gloves and shoes—has already been showcased on this site. Today, we bring to you a close-up view of a piece of Army Nurse Corps insignia: the letters ANC in gilt superimposed on a bronze caduceus.

This particular pin belonged to Madison County native Odessa Chambers, who graduated from the nursing program at Meriwether Hospital and Training School in Asheville in May 1916. In March, 1918, she was accepted into the Nurse Corps and ordered to report to New York for advanced training at General Hospital #1.

In September, she and her fellow nurses of Base Hospital 65, boarded a transport for France where the unit served in the port city of Brest. Here they battled the influenza epidemic and attempted to piece back together bodies broken on the battlefield. It was a hard tour of duty.

In March 1919, Chambers was transferred to Embarkation Hospital #4 housed in the Polyclinic Hospital in New York City, where she remained for about a month. A seven-month assignment at a camp hospital followed. Chambers received an honorable discharge on November 4, 1919, having spent approximately twenty months in the corps.

Free of military obligation, Chambers returned to Asheville to resume her professional life as a civilian nurse, which job she held until her retirement in 1947. She loved teaching others about caring for and studying birds and was very active in the American Legion. Chambers died in 1963 and is interred in Green Hills Cemetery in Asheville beneath a veteran’s headstone.