Profiles from the Archives: North Carolina Council of Defense

100 years ago today, the North Carolina Council of Defense was officially formed by Governor Thomas W. Bickett for the coordination of wartime home front activities throughout North Carolina. 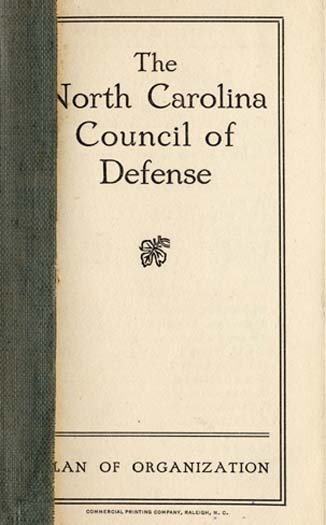 The Council’s responsibilities included “coordinating resources and industries for national defense” and “stimulating civilian morale.” As President Woodrow Wilson said of the Council: “The Council of National Defense has been created because Congress has realized that the country is best prepared for war when thoroughly prepared for peace. From an economic point of view, there is very little difference between the machinery required for economic efficiency and that required for military purposes. The Council is organized for the creation of relations which will render possible in time of need the immediate concentration and utilization of the resources of the Nation” (The North Carolina Council of Defense Plan of Organization, 1917).

The work of the Council grew more significant when the United States entered World War I in 1917. The federal government held a conference on May 2, 1917, in Washington, D.C., to facilitate the organization of state councils of defense, to which Joseph Hyde Pratt, North Carolina’s state geologist, was appointed to represent North Carolina. The federal government used the conference to ask state governors to create their own local councils of defense to support the national war effort, with the goal being to cooperate with other state councils and the federal government in organizing and directing the resources of states, making them available and effective for national use. The state councils would also recommend changes in state laws to state legislatures, with the goal of the changes aimed at increasing the nation’s ability to respond to the needs of the war effort.

At the start of America’s entrance into the war, the Council coordinated resources and industries for national defense; stimulated civilian morale; coordinated the work of state and local defense councils and women’s committees; and later studied problems of post-war readjustment of soldiers to civilian life and reconstruction of the nation’s infrastructure. The Council of National Defense ceased its operations in June 1921. 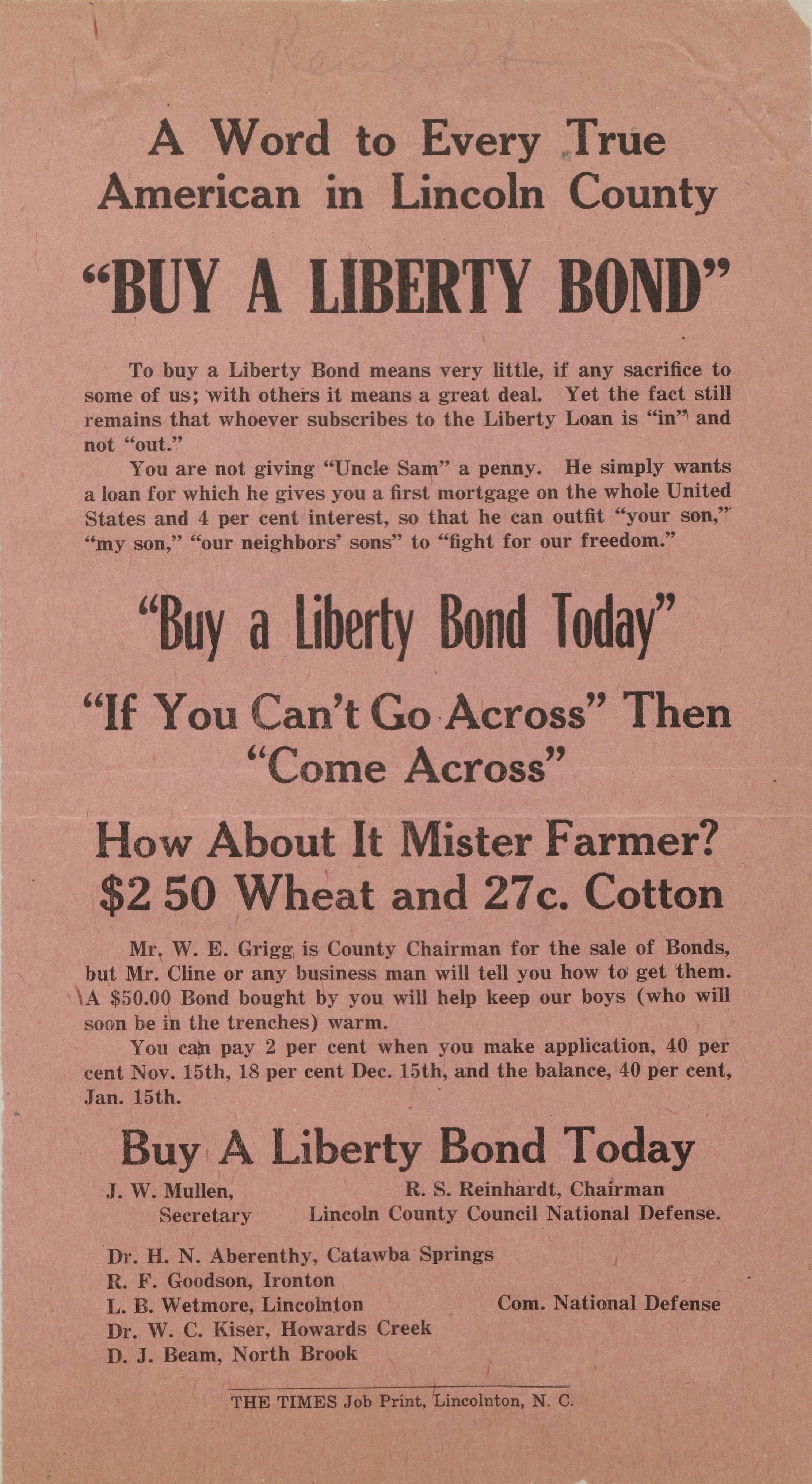 At the initial meeting, Hill Jr. was appointed Chairman of the North Carolina Council of Defense; B. R. Lacy, North Carolina’s State Treasurer, was named treasurer; and W. S. Wilson—a state legislative reference librarian—was selected as secretary of the state council. The Executive Committee organized sixteen state‐level committees and identified potential chairmen for county councils in all one hundred counties of North Carolina.

For the entire duration in which the United States was involved militarily in the war, the North Carolina General Assembly was not in session. Therefore, the state’s Council of Defense was unable to receive governmental appropriations and had to rely upon private donations to function. None of the council members—either at the state or local level—received any financial compensation for their services to state during World War I.

The North Carolina Council of Defense acted as a clearinghouse for information received from the Council of National Defense. One of the first statewide initiatives was the organization of a speakers’ bureau to inform the populace of the causes of the war and the reasons for American involvement. Other speakers urged soldiers to take advantage of the offer of government insurance or intervened with deserters, urging them to return to the ranks to avoid prosecution.

The state Council investigated the loyalty of applicants for positions in government agencies or service organizations, and encouraged college students to volunteer for community work efforts. After the erection of training camps in the state, the state Council formed a War Camp Community Service division to provide entertainment, recreational opportunities, and moral guidance for the trainees. In the fall of 1918, the state Council reviewed applications for building permits which sought exceptions to the nationwide prohibition of non-essential construction activity.

However, the bulk of the real work of the North Carolina Council of Defense was performed at the local level. Each county chairman was to appoint six members to his council, to organize committees that mirrored the state blueprint, and to create township and community councils. A Soldiers’ Business Aid Committee was erected in each county to help soldiers deal with legal matters, such as the writing of wills. Local committeemen provided encouragement and assistance to soldiers’ families, and interviewed individuals of doubtful loyalty to caution them against seditious activities. They also compiled reports concerning property owned by alien residents in their county.

The county boards helped to organize the various fund‐raising drives, including Liberty Loans, thrift stamps, the Fosdick Fund, and American Red Cross campaigns. They assisted local draft exemption boards to compile lists of draft‐age men, and organized the reserve militia or home guard in their county. Some of the more prescient county chairmen took an active role in the preservation of their council’s records, which they donated after the war to the North Carolina Historical Commission’s on-going World War historic materials collection project, per Sections 3 and 4 of Chapter 144 of the North Carolina Public Laws and Resolutions in 1919. 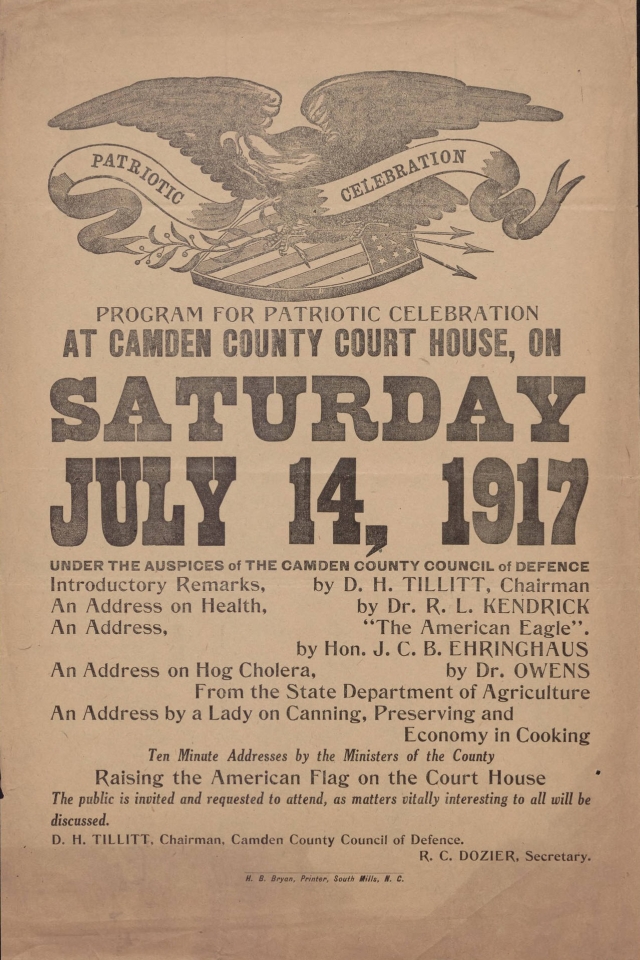