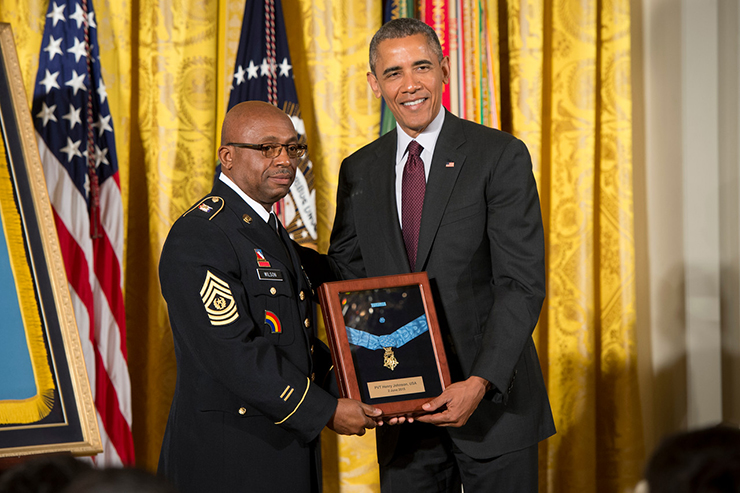 Until two years ago, only two native-born North Carolinians had been recognized with the Medal of Honor for their service during World War I. That changed in June 2015 when President Barack Obama posthumously awarded our nation’s highest military commendation to Sgt. William Henry Johnson, of the 369th Infantry.

Born in Winston-Salem on July 15, 1892, Henry, as he liked to be called, experienced a North Carolina vastly different from the one we know today. Beginning in the mid-1890s with the election of Furnifold Simmons, North Carolina Democrats sought to contain and curtail the rights of African American citizens. The trend culminated in violence in 1898 when white residents in Wilmington rioted, killing and injuring dozens of their black neighbors, driving off hundreds more, and forcing black politicians and community leaders to give up their offices.

In the aftermath of the Wilmington Coup, whites redoubled their efforts to chip away at black civil rights, passing Jim Crow laws that not only disenfranchised black North Carolinians but also forced them into socially segregated spaces. But the abuses did not end there. Black citizens additionally faced increased racial violence, job discrimination, and a prejudiced judicial system.

The poor conditions led to a mass migration of black southerners to Northern cities in the first half of the 20th century, where better jobs, housing, and social conditions were all more attainable. Between 1900 and 1940, more than two million black southerners made the journey. Henry Johnson was among the opportunity seekers, relocating to New York state at some point in his teenage years. 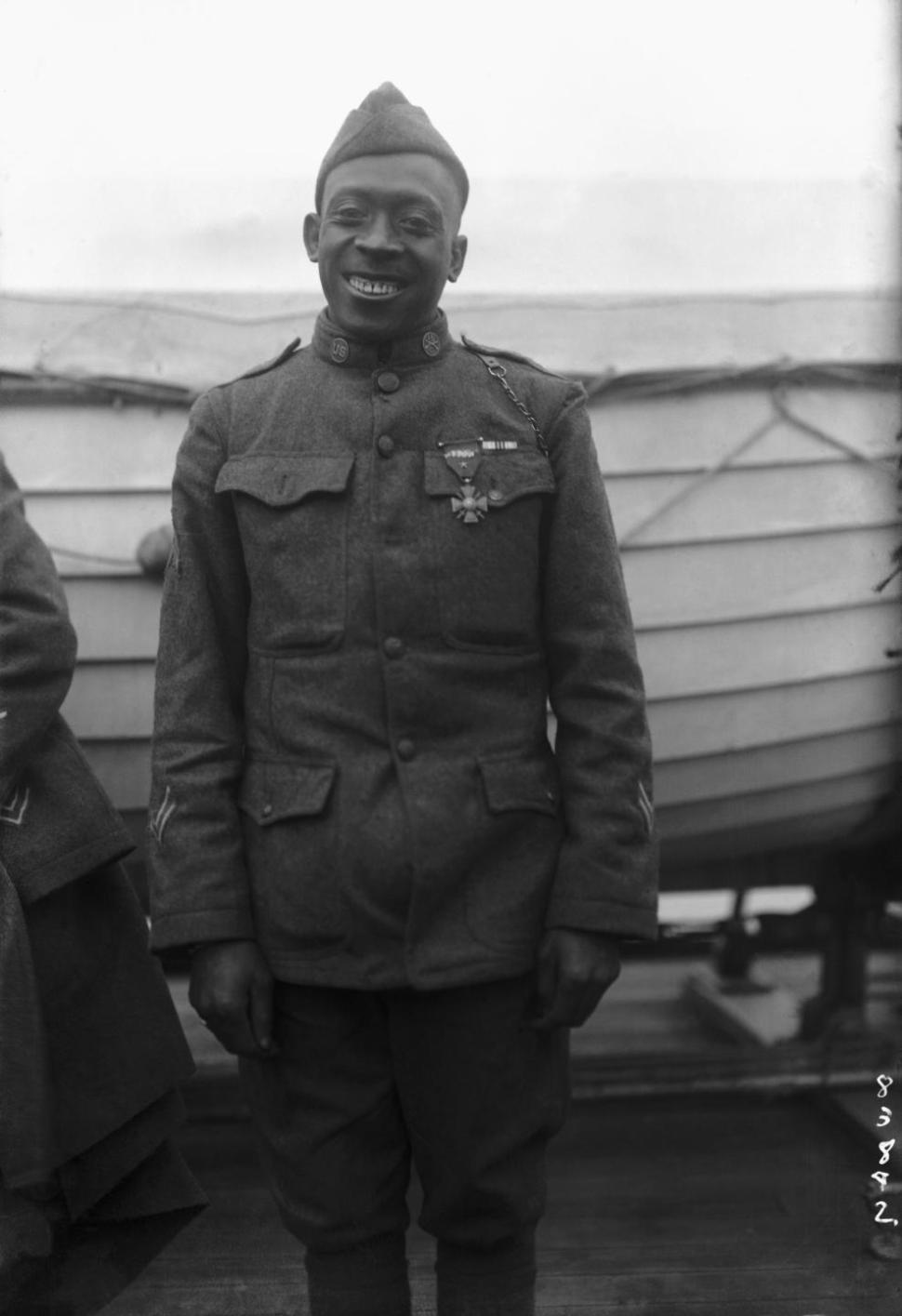 Johnson settled in Albany where he worked a variety of jobs—chauffeur, soda mixer, coal yard laborer, and train car porter—at the city’s Union Station before joining Company C of the 15th New York (Colored) Infantry Regiment on June 5, 1917. The all-black National Guard unit was sent to Camp Wadsworth at Spartanburg, South Carolina, for training, despite the loud protests of southerners. There they faced prejudice again, with many white business owners refusing to sell their products to the black volunteers.

The men’s wish for overseas deployment was finally granted in late 1917, and by the end of December, they landed on European soil. In France, the regiment was redesignated as the 369th Infantry and transferred to French command for service on the battlefield. Advanced combat training followed, this time under the watchful eye of battle-hardened French veterans, before the regiment was sent to take up a position on the French line in the Argonne Forest in Champagne, France. It is here that Johnson faced the ultimate test of courage.

The night of May 15, 1918, found our hero Johnson alongside comrade Needham Roberts as they stood guard in an outpost near German lines. Without warning, at least a dozen German troops descended upon the outpost, lobbing grenades and firing guns. In the initial volley, Johnson was hit three times and Roberts twice. The German troopers then stormed the outpost, expecting to easily capture the occupants. Johnson and Roberts, however, had a different plan.

As the Germans drew close, Johnson and Roberts let fly bullets and grenades, wounding a few of the raiders. But the Germans pressed on, pushing right on into the outpost. The fight turned into a desperate hand-to-hand contest, with Roberts—immobilized by his wounds—being overpowered. German troops were dragging him off when Johnson grabbed his emptied rifle, and wielding it like a club, cracked a man over the head. Two more men were battering Roberts when Johnson pulled his bolo knife and dispatched both. The rest of the raiding party gathered their wounded and fled the field.

As quiet returned to the outpost, the men took stock of their wounds. Johnson was wounded an astonishing twenty-one times. The exploits of the two men spread like wildfire through military command. Gen. John J. Pershing wrote favorably of their service, crediting the men with “preventing, by their bravery, the capture of any of our men.” President Theodore Roosevelt called Johnson “one of the five bravest American soldiers in the war.” 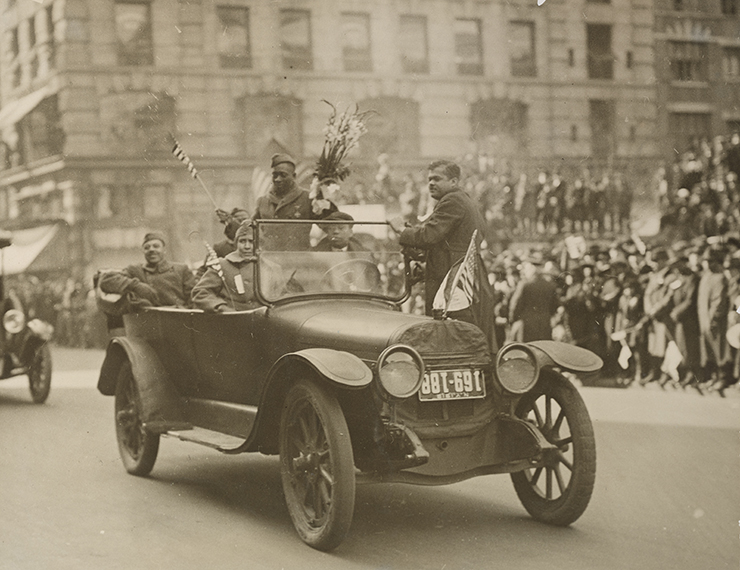 The French were likewise effusive, awarding each man a Croix de Guerre—or Cross of War—a commendation given in recognition of conspicuous courage. French commanders additionally praised Johnson for providing a “beautiful example of courage.” But back home in the States, the American government, exhibiting racial prejudices of the time, was extremely slow to formally commend Johnson’s heroics.

Though established in 1932, a Purple Heart was not awarded Johnson until 1996. A Distinguished Service Cross, which unlike the Purple Heart was an active commendation during the war period, took even longer, Johnson finally receiving one in 2003. On June 2, 2015, eighty-five years after his death, Henry Johnson received his long overdue Congressional Medal of Honor, fittingly bestowed upon him by the nation’s first black president.

Sergeant Johnson died in Washington, D.C., on July 1, 1929, of myocarditis, a heart condition, and is buried in Arlington National Cemetery.

Note: There remains quite a bit of confusion regarding Henry Johnson’s past. Many facts had been forgotten or innocently confused over the years. To learn more about present-day efforts to set the record straight, I highly suggest this article by the Washington Post and this Huffington Post piece by the genealogist who tracked Johnson down in the historic record.