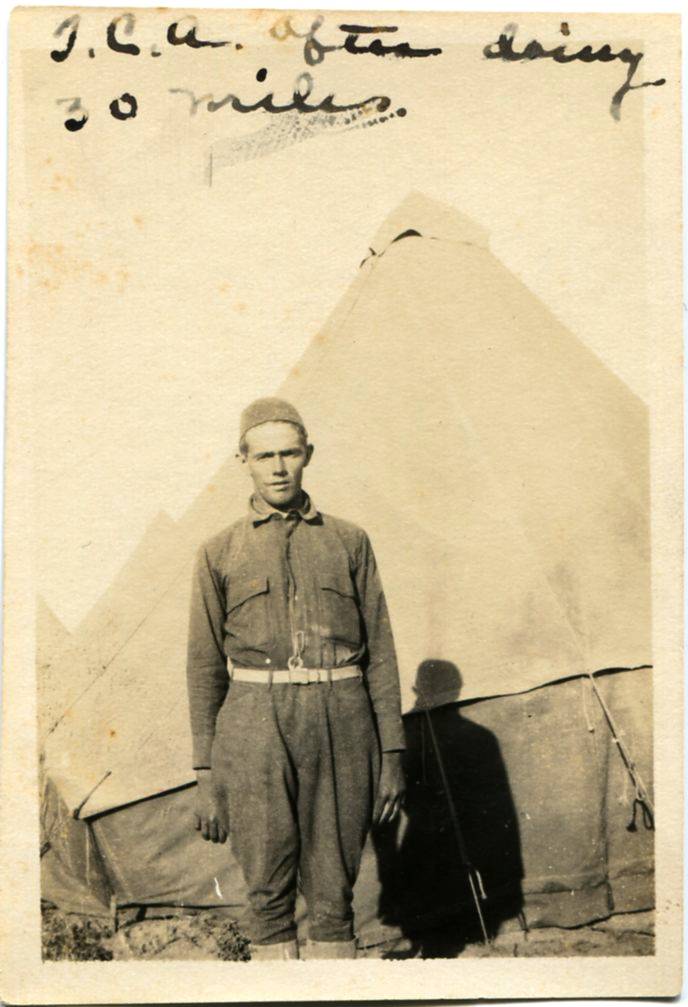 Thomas Cheatham Alston was born on April 22, 1894, in the city of Louisburg in Franklin County, N.C., to Archibald W. and Jennie R. Cheatham Alston. Thomas’ father was a grocery merchant in Franklin County by 1900. After working as a clerk for a time, Thomas Alston enlisted on April 9, 1915, in the North Carolina National Guard in Louisburg, North Carolina, for a three-year period. Prior to World War I, Alston served two and a half years in Company D, 3rd North Carolina Infantry, which was headquartered in Louisburg.

When the North Carolina National Guard was called to the Mexican border on June 19, 1916, as part of the Punitive Expedition against Pancho Villa, Thomas Alston went with Company D to Camp Glenn, N.C., on July 1, 1916. Camp Glenn was the North Carolina National Guard’s annual encampment site and training site, where the state’s guard units came together and began to train for federal service.

Thomas Alston and his unit left Camp Glenn on September 27, 1916, for the U.S. Army station at Camp Stewart in El Paso, Texas, arriving there on October 2, 1916. Company D, 3rd North Carolina Infantry, was stationed at Camp Stewart through February 1, 1917, performing border patrol duty as the regular U.S. Army units crossed over the Mexican border in pursuit of Pancho Villa and his men. On February 1, 1917, Company D moved to Las Cruces, New Mexico. On February 7, 1917, Alston’s unit moved to Anapra, New Mexico, and returned to Camp Stewart in El Paso on February 15, 1917.

Alston and Company D left Texas on March 15, 1917, arriving at Camp Bickett in Raleigh, North Carolina. Company D, 3rd North Carolina Infantry, was mustered out of federal military service on March 27, 1917. Alston reached the rank of sergeant during his time along the Mexican border.

After the United States entered World War I, Thomas Alston was called back into service on July 25, 1917. He was drafted into federal military service in the second increment of the first federal draft on August 5, 1917, when the North Carolina National Guard was called into service. He would serve during the war in Company D, 120th Infantry, 30th Division, U.S. Army. Alston went with his North Carolina National Guard company to Camp Sevier, S.C., for basic training from August 31, 1917, to May 8, 1918. 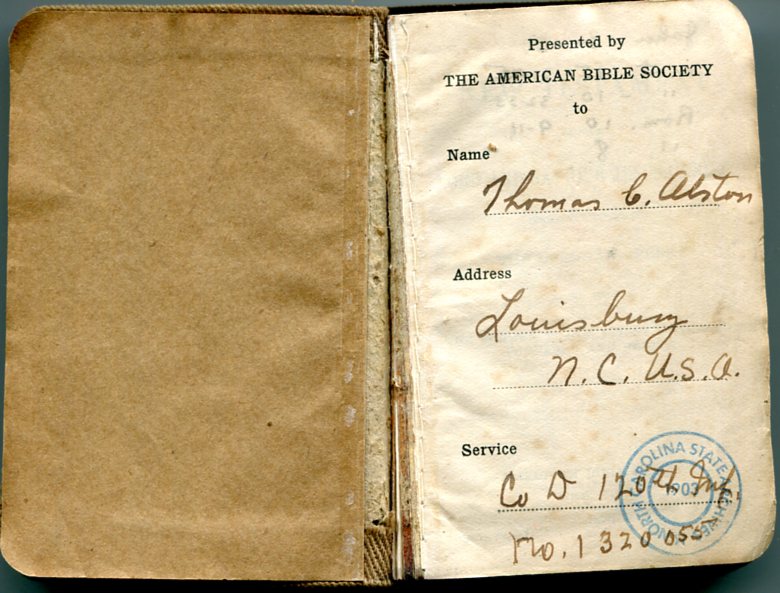 Company D left the U.S. on May 12, 1918, for France, arriving via England on May 29, 1918, in Calais, France. Alston and his men served in Belgium and France, with one of their most notable military campaigns being the Allied push along the Hindenburg Line starting on September 29, 1918, through October 3, 1918. Company D was involved in the taking of the French sectors of Bellicourt, Naurey, and the St. Quentin Canal.

Thomas Alston and his unit left France on March 27, 1919, for the United States aboard the troop transport ship the USS Powhatan. Company D arrived in Charleston, S.C., on April 11, 1919. Alston was mustered out of federal service and discharged on April 19, 1919, at Camp Jackson, S.C. 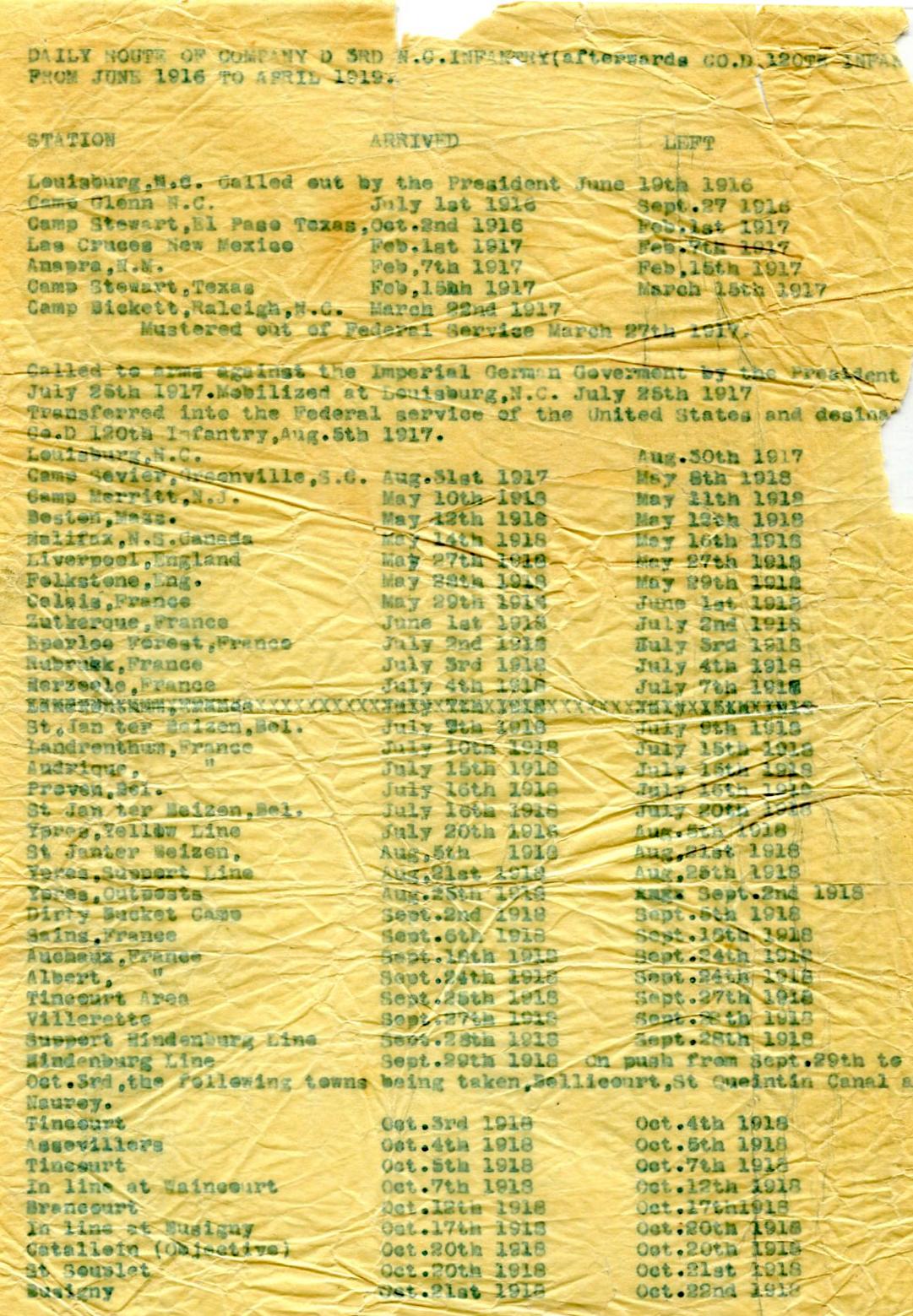 By 1920, Alston had returned to live with his family in Louisburg, N.C., and worked as a retail store salesman. Thomas Alston would marry Mittie Gray Young on June 23, 1920, in Nash County, N.C. By 1930, Thomas and Mittie Alston were living with Thomas’ parents in the family home in Louisburg, and Thomas had become a railway clerk. Prior to his death, Alston worked as an express truck driver for American Railway Express, Inc.

Thomas C. Alston died of Hodgkin’s lymphoma on August 24, 1938, in Louisburg, N.C., and was buried in Oakwood Cemetery in the same city.

To learn more about Thomas Alston’s WWI service, check out the Thomas C. Alston Papers (WWI 66) in the WWI Papers of the Military Collection at the State Archives of North Carolina in Raleigh, N.C.