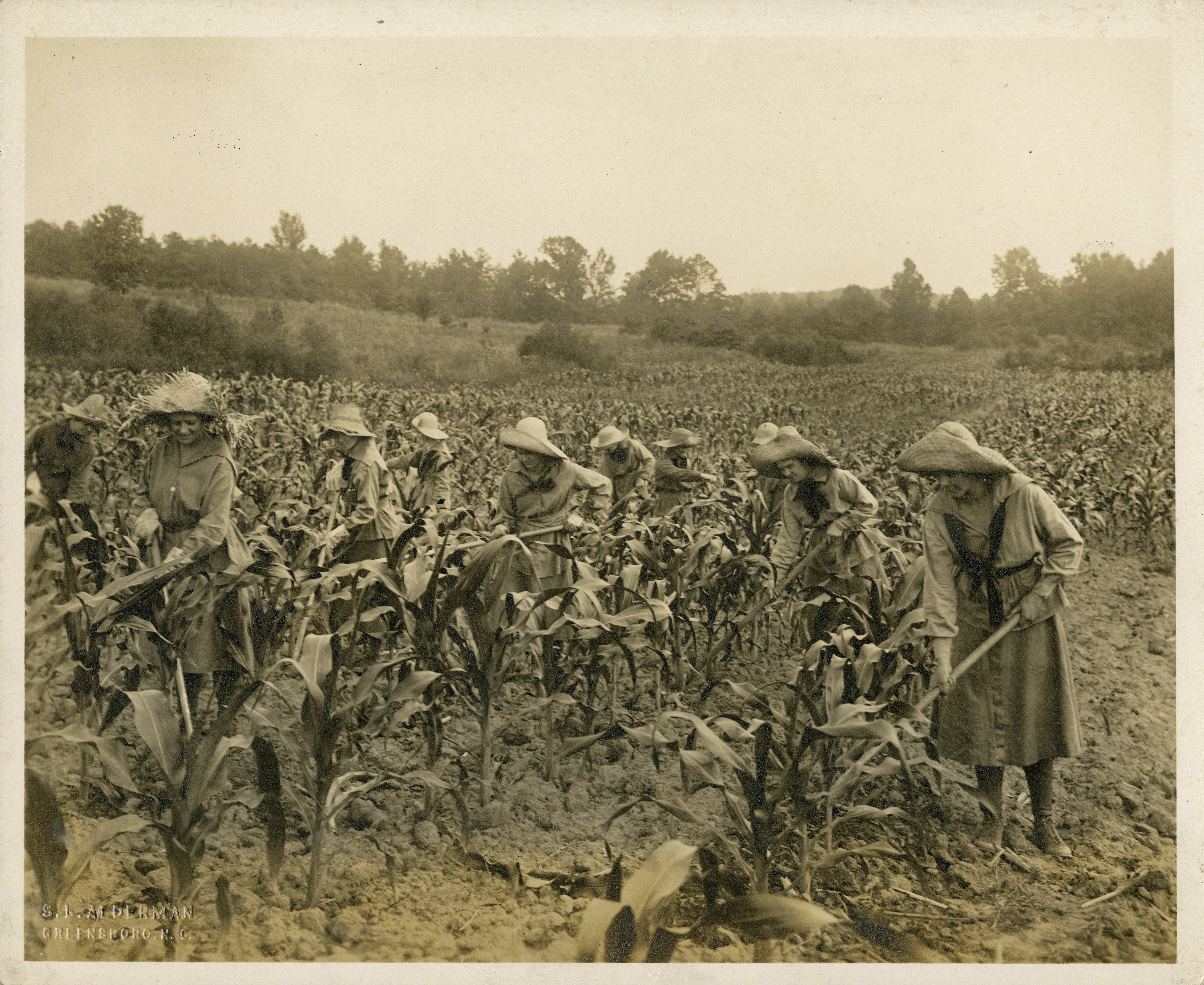 President Woodrow Wilson’s war declaration in April 1917 tasked able-bodied American men with the very great responsibility of defending our nation from a foreign enemy. But it was not a burden they shouldered alone. Every segment of American society mobilized behind the Allied war effort. Manufacturers exponentially increased production to meet the new material and munitions needs of the nation. Schoolchildren raised money for various fundraising efforts, while women volunteered for service with the Young Women’s Christian Association (Y.W.C.A.), the Red Cross, the Army, or the Navy. 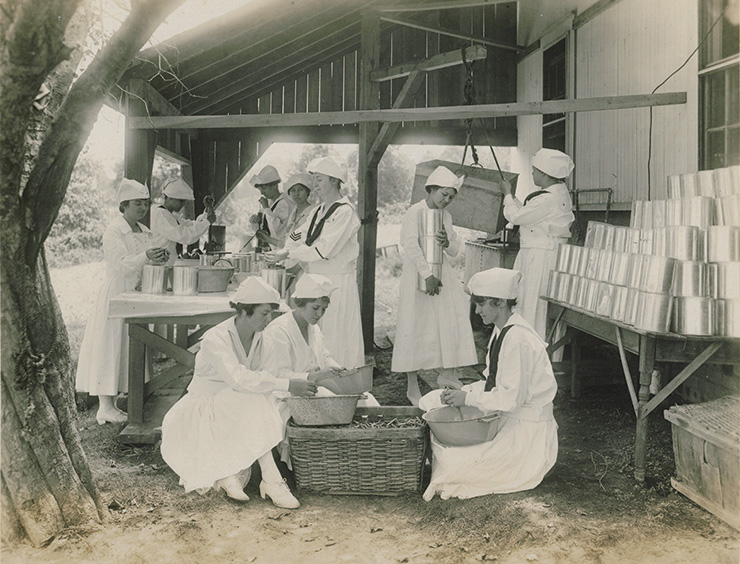 Even college campuses could not ignore the call. While students at men’s colleges learned drill, foreign languages, and military tactics in preparation for service on the battlefield, female students took on responsibilities that were often forbidden to the “fairer sex.” Perhaps no North Carolina women’s college took this call more seriously than did the State Normal and Industrial College, the precursor to the University of North Carolina at Greensboro.

Over the summer of 1918, ten women at Normal—five recent graduates and five returning students—volunteered as farmers with the Women’s Land Army organization. While the rest of their classmates returned home for summer break, the volunteers moved into one of Normal’s smaller dormitories, donned khaki skirts and big straw hats, and committed themselves to planting and maintaining a seventy-five-acre farm. In addition to growing vegetables like corn, beans, and tomatoes, the farmerettes—as they were popularly called—harvested hay, cared for hogs, and assisted in the dairies. When the women weren’t working in the fields, they were canning the produce they harvested. By the end of the season, they had canned thousands of gallons of snap beans and tomatoes. 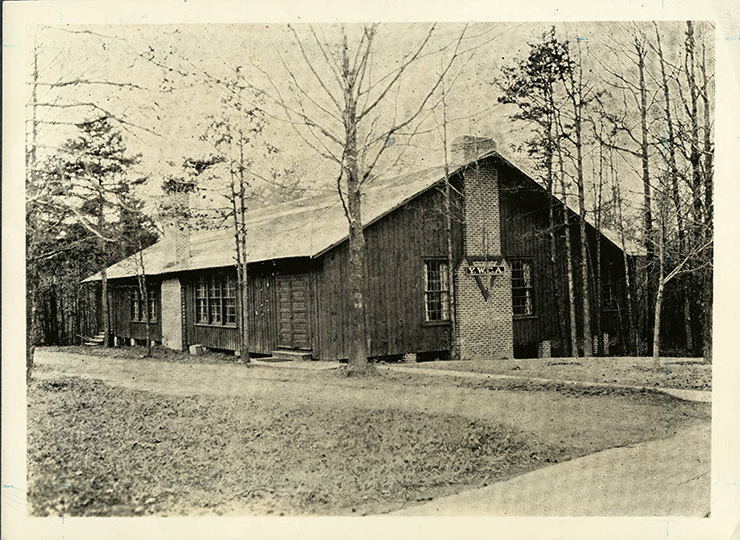 Seven other Normal students banded together to form a group known as the carpenterettes. These overall-clad volunteers sought to replace male laborers lost to the war by taking on construction responsibilities on campus grounds. In August 1918, these women cleared a piece of land off the north end of College Avenue and began construction on a Y.W.C.A. hut. They laid the brick foundation and assembled the wooden framework of the building, leaving the “inside work” to better-skilled carpenters.

The resulting building, which featured four large fireplaces and deep window seats, remained in use as a recreation facility for thirty years. Influential sisters Gertrude Weil and Janet Weil Bluethenthal donated $1,000 for furnishings. A phonograph from none other than Thomas Edison himself was a cherished addition. Students gathered to read, hold meetings, or cook meals. During the influenza epidemic of 1918, the Y.W.C.A. arranged for several Main Street shops to set up kiosks within the building so that Normal students could Christmas shop with a much lower risk of being exposed to the disease. 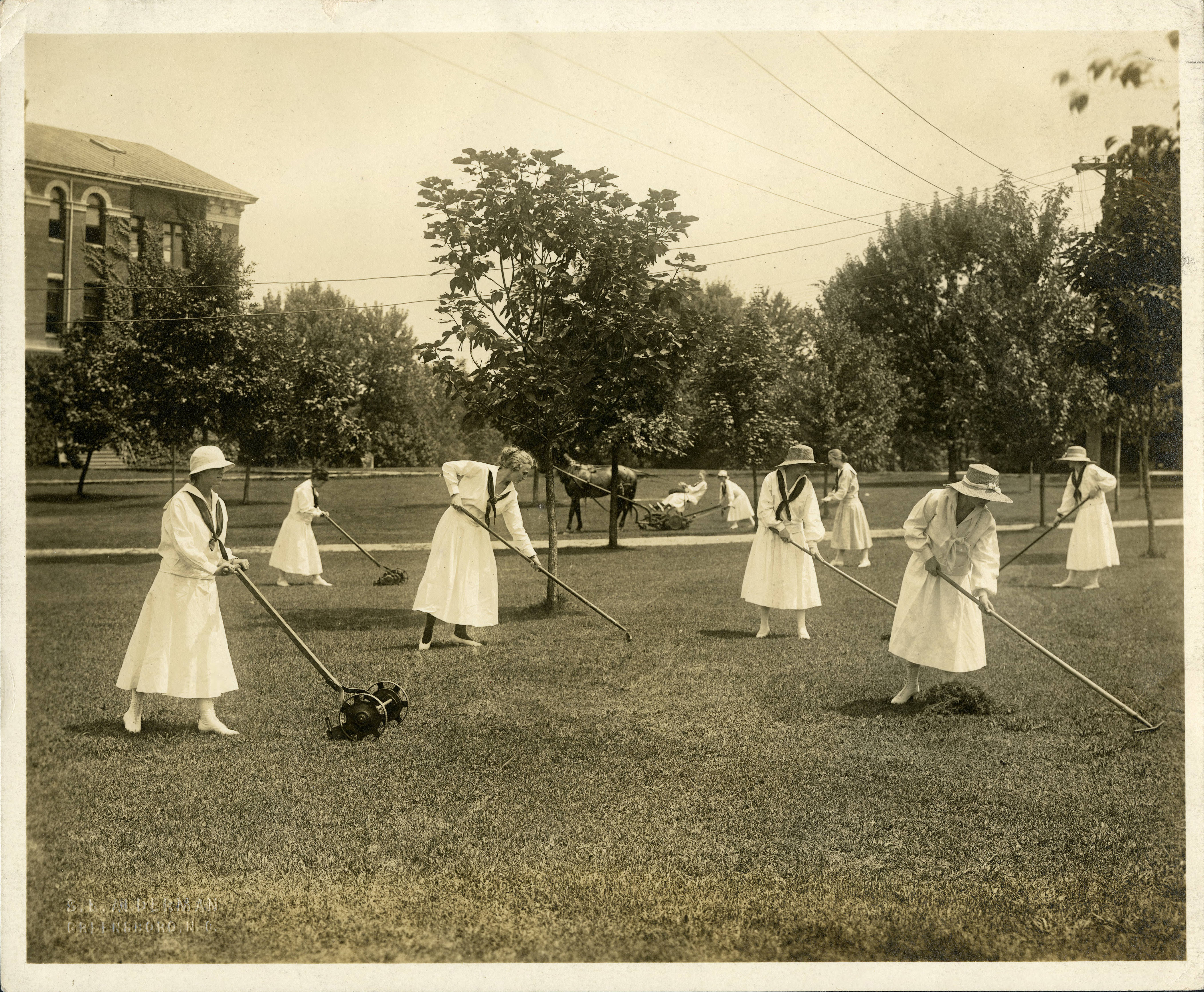 Still another group volunteered to keep up the school’s grounds by doing all of the mowing and raking. The program proved so popular—President Julius Foust reported that the campus “has never looked so well”—that it was continued for many years after the war. Fifteen students volunteered as stenographers, helping to disseminate information to student volunteers throughout the state. Another group of girls, known as the Normal Regiment, learned drill and participated in parades promoting various war efforts and fundraisers. Red Cross members, of which there were over 100, collected donations, knitted clothing articles, sewed bedding and pajamas, made trench candles, and rolled bandages. To bolster food conservation efforts, the entire student body adopted meatless and wheatless days and cut way back on sugar consumption.

State Normal students awoke on November 11, 1918 to the joyous news of the Armistice and set about celebrating alongside their fellow state citizens. They built a bonfire on the school’s hockey field (now the site of the Petty Science Building) and sang songs long into the night. On November 12, dressed in all white with flags in hand, the students joined in a celebratory parade in downtown Greensboro.

Interested in seeing more images relating to the war experiences of State Normal College students? Many more are available to view online on UNC Greensboro's digital collections. Follow the links to find more images of the farmerettes and Campus Squad.