Building Ships for the Government 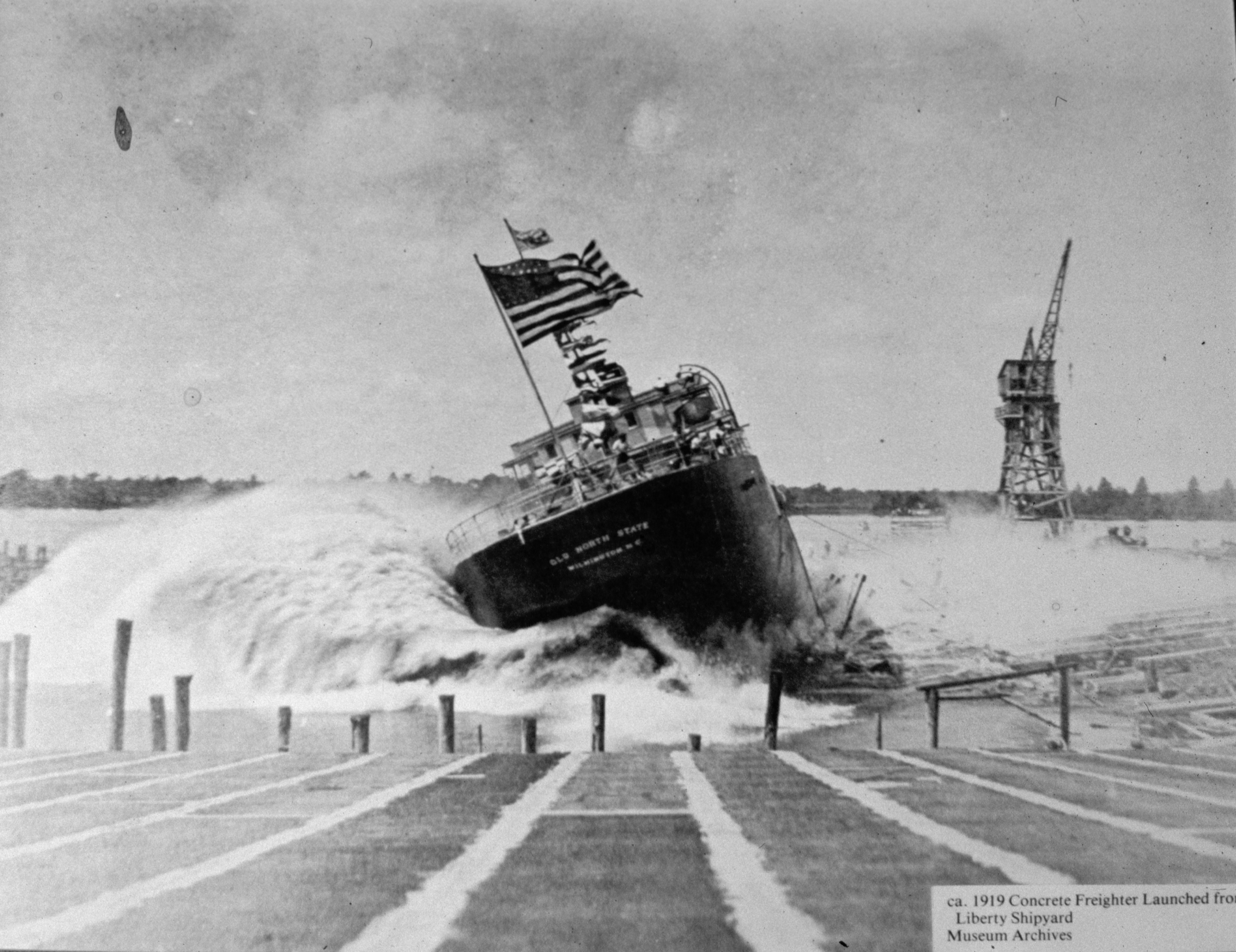 We’ve already discussed some of the manufacturing contributions the state has made to the war effort (wagon wheels, practice projectiles, and airplane propellers), but did you know that North Carolina also provided the Federal government with ships? Shipyards in Wilmington, Beaufort, and Morehead City all secured contracts with the government through the United States Shipping Board during the war period to produce ships made of both wood and concrete. Yes, you read that right. North Carolina made ships out of concrete.

Just ten days after our country’s declaration of war against Germany, the Shipping Board established the Emergency Fleet Corporation (EFC) and charged the organization with preparing the merchant fleet to meet wartime needs. For years, German u-boats had wreaked havoc upon the commercial shipping lanes between the United States and Europe, sinking hundreds of merchant vessels and devastating the supply line between the two continents. The EFC sought to create a “bridge of ships” to bolster the transatlantic supply routes and needed to act quickly if it was to meet the demands of the crisis.

EFC leaders began the undertaking by commandeering all enemy commercial vessels docked in US ports following the war declaration. The Corporation then consolidated these with available ships to give the fleet a jump start and began issuing contracts for the construction of new vessels. 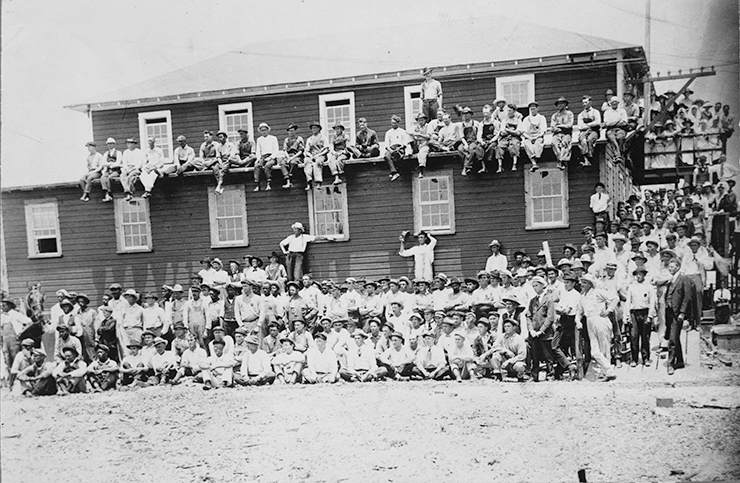 It seems that the first EFC contract issued to a North Carolina shipbuilder was secured by the North Carolina Shipbuilding Company in Morehead City in the summer of 1917. The contract called for the construction of two vessels, the first to be delivered in May 1918. Labor shortages hampered the company’s progress, however, and the first ship wasn’t completed until October 31. The Dassalan was the largest ship ever launched in North Carolina at that time, with a keel measuring 281 feet long. News of the Armistice just ten days later brought a swift end to the shipyard’s operations, and after the launching of its second ship, no further government contract ships launched out of Morehead City.

This one shipyard alone required millions of feet of timber for the construction of just two vessels and a large amount of steel, a material that was in high demand but short supply during the First World War. Shipping Board chairman Edward Hurley, upon the recommendation of Secretary of Commerce William Redfield, approved a concrete shipbuilding program and, through the EFC, began issuing contracts for the work. The use of concrete would alleviate some of the demands on the steel and lumber supplies. Two North Carolina shipyards, the Carolina Shipbuilding Company and the Liberty Shipbuilding Company, both of Wilmington, won the highly prized contracts.

The results kicked off an absolute building and population boom in the port city. Thousands of skilled men were needed to get the job done, and laborers and their families flooded into the area, necessitating the rapid construction of new housing facilities. Local contractors set about building new offices, machine shops, and cafeterias in order to accommodate the rapidly expanding operations. The State Council of Defense recruited blacksmiths, painters, welders, electricians, and laborers throughout the region in an attempt to alleviate labor shortages. Even women could find gainful employment at the yards. Capable stenographers were always in high demand. 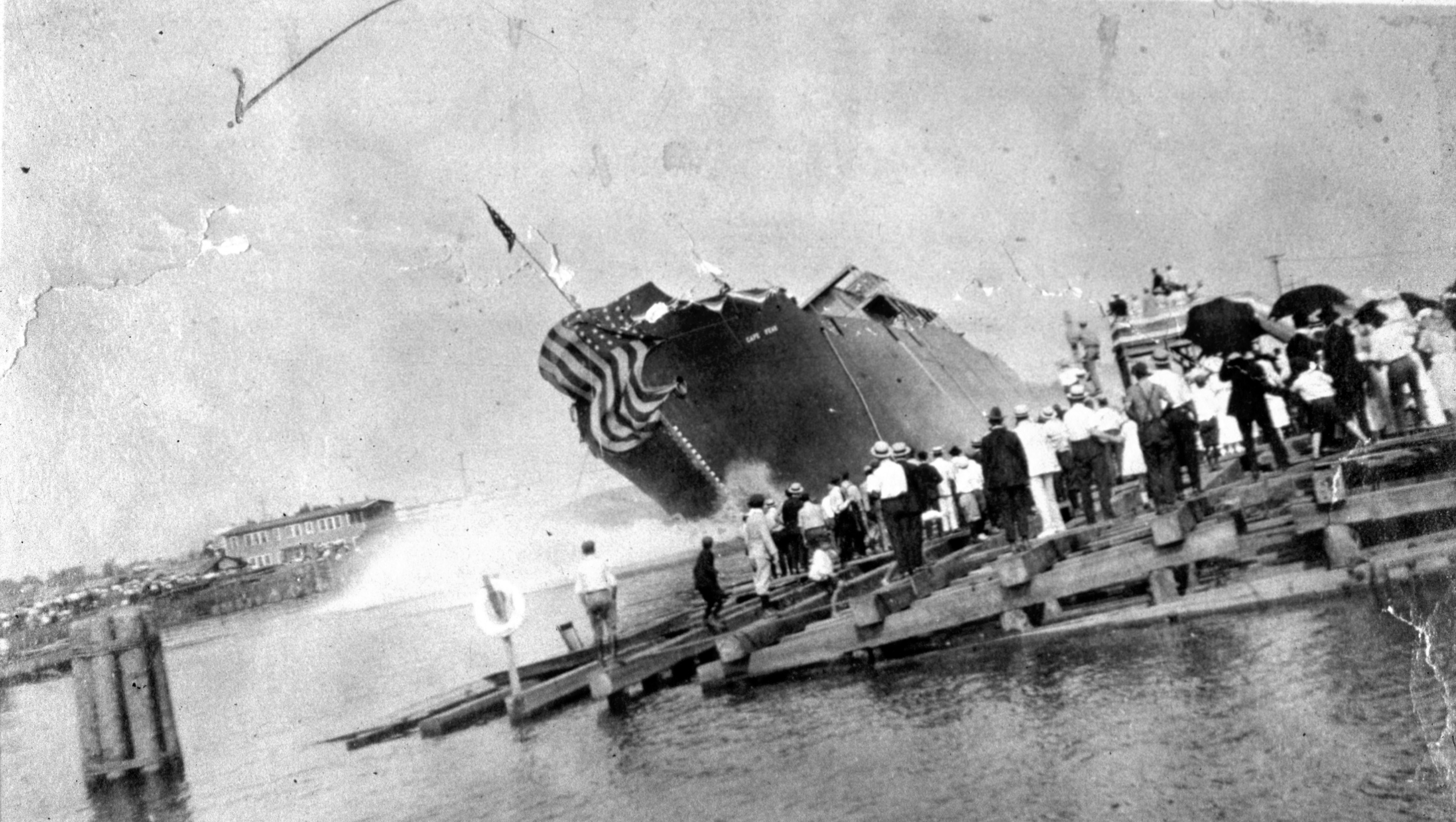 Carolina Shipbuilding’s contract called for the construction of twelve steel-reinforced concrete 9,600-ton freighters. Concrete ships were constructed by laying a keel, adding steel ribbing, and then building a ship-sized wood-frame mold around the steel skeleton into which concrete was poured. Construction delays and steel shortages conspired to prevent Carolina from laying its first keel until November 2, 1918, just nine days before the Armistice. Liberty Shipyard wasn’t able to lay the first keel of its eight-tanker contract (three 3,500-ton and five 7,500-ton) until January 1919.

As with many wartime contracts held by North Carolina manufacturers, the Armistice brought a swift draw-down of the contracts held by the state’s shipbuilders. Between the two companies, only three concrete ships would see the water: the Cape Fear and the Old North State, by Liberty, and Carolina’s Cranford. Despite the fact that the ships didn’t see wartime use, it was good practice for Wilmington. Just two decades later the city would be called upon again to build ships for its country in a time of great need: World War II.

Author's Note: Special thanks are due to the awesome folks at the New Hanover County Public Library who loaned us the images of ship lauchings seen here. You can find many more such photos, including ones from Wilmington's shipbuilding boom during World War II, in their digital archives collection online.